Schrödinger’s Box or the Purloined Letter 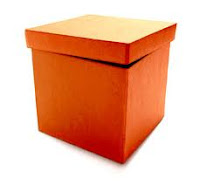 With mischief-making on his mind
he finds the box hidden behind
the dolls thrown in so carelessly
all broken…twisted. Secretly
he fumbles in the quiet house
to carry out his mission of revenge
of which his sister’s punishment will end
the hurt he feels.

Upon returning from church Flo brushes Sunday off her hat and places it back in the box.
The green-felted brim smiles up at her, alluding to future outings.
Replacing the lid she notices the fragment of a stamp lying in the corner of the box and goes downstairs to make some tea.
Posted by Particulations at 15:59