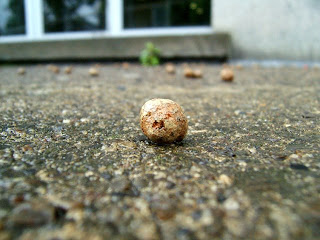 Saturday August 1st 2009. We set off from the Parkinson Steps at the University of Leeds at approximately midday. Five members of the group were present. The method used for the randomness quotient of the dérive was as follows:

Take a downloaded piece of Situationist text ('The Theory of the Dérive' by Guy Debord). Using a piece of tracing paper, draw a dot over the first word on each line that begins with a 'p' (for 'psychogeography'). Make a separate note of all these words. Lay the tracing paper over a map of the University of Leeds campus. Draw a line, moving from right to left which connects those dots that lay on top of the map. Ignore the dots that are outside of the map. The end result is a zigzag line on the tracing paper that is superimposed over the map. The line becomes the route (as much as possible that it can be followed), the dots become the stopping places. Each point of stopping would then have the relevant word attached to it. Also, the photographs attached to the map, would be a picture looking towards the next point that would be visited.

As before, we had a GPS tracking device, and two cameras, one attached to the stopping points on the map, as can be seen below.

We began our dérive from the North edge of the university and worked towards the South, in a zigzag fashion. Within a few minutes of beginning, a 'found object' was stumbled upon, hence the name of the dérive (see image above).

This campus dérive seemed to take us to a number of maintenance-related sites on the campus, including a section of the university that had asbestos located in a room behind the geography/textiles blocks area. There was a warning on the door, but the door had been left open, and the area was not protected.

A number of redundant signs were found during the walk. Smallish, unobtrusive, plastic signs in varying primary colours, with arrows on. These were on a number of buildings in the area around the Union building. No text appeared alongside the arrows.

We also found an area that was being treated for Japanese Knotwood. It was fenced off and had been treated due to its rhizome-like root format:

Again we ended up in St. George's Field, but our route this time was different and we discovered a whole new set of phenomenonon in the cemetery. Including small memorial spots (maybe actual graves): one for a 6 month old child, going back to 1946.

We discovered a blue plaque dedicated to Sir Clifford Allbutt, who apparently invented the clinical thermometer, which replaced the previous one-foot long one that the poor ill patients had to not only negotiate into their mouths but also hold in place while it took 20 minutes for the result to appear!

We also found a very attractive building called 'The Priory', which had no connection to drug rehabilitation. Upon enquiry we found out it was a halls of residence. It is apparently a private organisation that provides student accommodation. This property On the dge of the Leeds campus charges £115/week and describes itself as “Truly Unique Student Accommodation”:

The weather was poor. We were rained on more than once. Our dérive ended at approximately 4.00pm, but in that time we had at least 2 generous breaks. At some point during the dérive we realised we had been using the words attributed to each point in reverse order. We interpreted this as part of the chance element of the walk.

We did not complete the whole of the original path assigned to the map by the above-mentioned method. However, it will be completed shortly, and will, of course, appear as a separate dérive because: a dérive is "considered as the time between two periods of sleep" (Guy Debord).

N.B. This is the blog of one member of the group, and therefore is subjective.
Posted by Particulations at 18:57