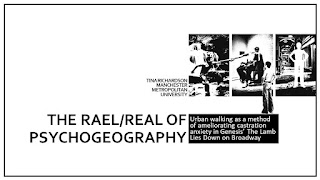 I will be presenting a short research-based performance style lecture on June 13 at Manchester Metropolitan University entitled:

The Rael/Real of Psychogeography: Urban walking as a method of ameliorating castration anxiety in Genesis’ The Lamb Lies Down on Broadway

It is for anyone interested in psychogeography, psychoanalysis, popular culture, cultural theory and/or progressive rock.

The lecture will be about 20 minutes long and there will be time for questions afterwards. All welcome.

ABSTRACT:
Rael is not real, but he is a popular culture representation of a real individual who is a stranger in a new city. As a recent immigrant to New York, Rael has to negotiate the alien space that has suddenly become his home. Part hero, part graffiti artist, part urban explorer, we witness our protagonist traversing the physical landscape of the city and that of his own psyche.

By analysing Rael’s behaviour in the story, Richardson demonstrates that by taking a psychogeographic approach to the physical space of the city, and the abstract space of his own mind, Rael manages to work his way through the aesthetics of living in New York, as a foreigner, by facing his own troubled past.

I look forward to seeing you there.