The Model of Studentification and The Model Student 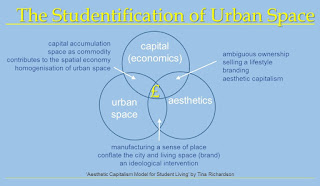 Above is my model of studentification that I revealed at the Fourth World Congress of Psychogeography on Sept 9 and 10. You can click on this link to find out more about my talk, Town and Gown: The Studentification of Urban Space, but in order to situate what I’d like to discuss in this post, I’ll just include a quick quote on what studentification is if you don’t want to follow through with the last link (you don’t need to read it to understand this post, but you might find it interesting re: aesthetic capitalism): 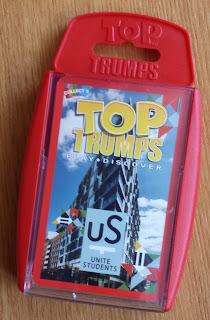 The cards feature Unite Group’s (or as they prefer to call themselves, Unite Student) student housing around the UK and instructions on how to play the game trumps (please see example below of some of their student housing in Leeds, right near Leeds Beckett University at Broadcasting Place). So not only can you see your own new home featured on the playing cards, but also those of your old school friends who are quite likely distributed around the country in one of Unite’s other student halls. Therefore you are already, in a sense, seeing something of yourself in the cards (I will build on this idea to make my argument). 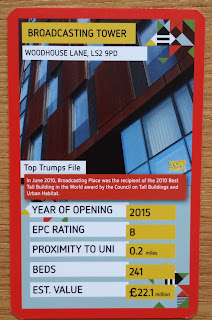 There are dozens of these properties, ranging from refurbished old priories and art deco flats to the postmodern flats you see in every city of the UK (they tend to look like they’re designed for ‘young professionals’ - with various degrees of architectural success). The cards actually tell you a little bit about the buildings. Some of the descriptions are useful and interesting, such as that for The Old Fire Station in Aberdeen: “The aptly named Old Fire Station actually still has a fireman’s pole inside”. But some are just preposterous, such as that on the card for Purbeck House in Bournemouth: “The combined height of all the residents of Purbeck House is 870 meters, which is higher than the tallest building in the world; Burj Khalifa in Dubai”!

So what is happening with these cards? What is operating on the unconscious of the students? How is this affecting their subjectivity? I am a cultural theorist and this is what interests me, after all. Let’s assume that they are being designed to actually be ‘played’ as a card game since as a marketing tool it is important that the individual cards are seen and that the company is valued for its vast property portfolio and ‘excellence’ in student housing (see my work on the term ‘excellence’ in regards to neoliberalism and higher education).

As you can see above, the cards all include property values on them (I’m not sure if this was the value on completion or when the cards went to print). So, in a way, we could liken this to a game of Monopoly (which my friend, above, told me they also have a Unite game of). I have written elsewhere about how the system of higher education (now run as a business in ‘the third stage of capitalism’) aims to produce ‘good’ consumer-producers, rather than individuals with knowledge for its own sake. But, I think Unite Group has taken this one step further by fully integrating the student into the capitalist process (ideologically), thus becoming party to producing ‘the model student’. The model student playing Top Trumps, recognising that they are now partaking in the lived experience of a product of capitalism – i.e. living in the Unite Students accommodation – is subconsciously recognising their future potential role as a ‘good’ capitalist (playing the game creates a mise en abyme effect). The game they are playing teaches them the rules in regards to property development/management. The instructions for the game says “The oldest i.e. with the earliest year of opening wins” (most profit in regard to long-term investment) and “The property closest to uni wins” (higher rent can be charged due to proximity). It teaches the student how profit-making works.

What is ideologically happening is that the model student looks at the card and sees her future self. This is the mirror of recognition as espoused by Louis Althusser. Providing an example of Christian religion he explains that “God is the Subject par excellence”. It is essential for the Subject of ideology that He reproduces Himself in the form of His subjects; and since man has been made in the image of God he will see himself in Him. This is a misrecognition because the individual is not actually God. Althusser discusses this mirror relationship in relation to how the subject of ideology (the individual - in this case the student in the Unite Student accommodation playing the game) connects with the Subject of ideology (the power structure in which the ideology is located - in this case capitalism in the form of Unite Group) through a process of misrecognition. Althusser says that it is this “universal recognition” that becomes the “absolute guarantee” that subjects within the relevant apparatus will do what is required of them by the respective organisational body. It is essential that this ideological process be seamless, opaque and 'instinctive' for its subjects: in other words, natural. Althusser says that the effect of this subjection is that it seems like a normal state of affairs - it is just the way things are.

The Unite Trump Cards are the mirror which situates the student as a subject in the machinery - the ideological apparatus - of capital. Not just as a consumer-producer, in the way the university ideologically produces students, but actually as a prospective capitalist herself.

Unite trumps the university!
Posted by Particulations at 10:10