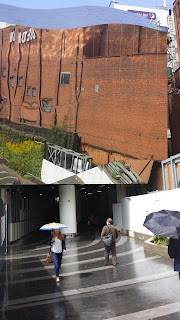 On 18th May I was kindly invited to Birmingham for the day by the artist Ally Standing to see the new development around the New Street area and also Spaghetti Junction. I took this photo at New Street. This contemporary building has one of the classic motifs of postmodern architecture, a mirror-effect that reflects the surrounding environment back onto the space: what Reinhold Martin describes as “feedback loops…a doubling back of the surface onto itself” (Utopia's Ghost: Architecture and Postmodernism, Again 2010: 106).

The building is ‘uncanny’ in the Freudian sense of the word: unheimlich. This is what I have said about the term ‘uncanny’ elsewhere:


Sigmund Freud takes the word from the German unheimlich which means the opposite of what one might find familiar (heimlich meaning familiar - homely, but be careful here, because for Freud the two terms become conflated in what he means by 'uncanny'). So, the uncanny has the qualities of both the familiar and the unfamiliar at the same time. I would describe it as producing a strange kind of affective dissonance, which is disturbing. It throws you into this spaceless space in between the two binary oppositions (recognisable/unrecognisable, understandable/incomprehensible). Sometimes 'the thing' recognised is known, but is out of place and this decontextualisation can create the feeling of the uncanny. (Particulations 2012)

The image creates a doubling back, as Reinhold describes above, and the reflection of the nearby Redbrick building is both familiar and unfamiliar, hence uncanny. You recognise it to be a Redbrick, but it appears to be sitting atop a single pillar which couldn’t possibly support it. The image below contextualises the setting better. It becomes less strange as you start to work out what is going on. 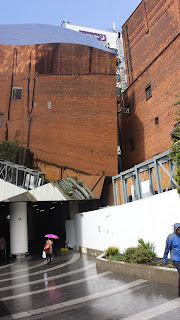 While I do think this image is very weird in its own right, I must say even standing there in this very spot produces an uncanny affect, despite the full context of the landscape being available to you. I am wondering if there is a potential for a perambulatory hinge to evolve at this spot over time. I posted the uncanny image on facebook today to see what people’s reaction might be. Here’s a lovely piece of haiku in response to it, written by Rob Lycett: 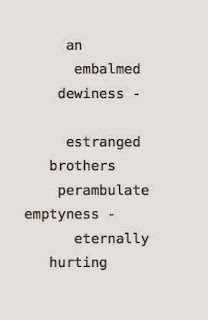 Related links:
A Psychogeography of the Westin Bonaventure
Taking an Urban Walk with Freud
An Encounter with the Uncanny
Posted by Particulations at 15:16