The Walker and the Urban Landscape 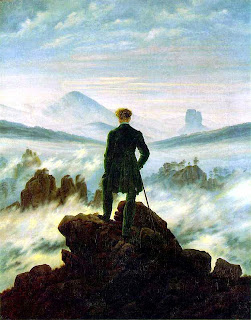 The next few blogs will be introducing each section of the upcoming book (due 2015, Rowman and Littlefield International). I’ll include a short abstract and the authors who will feature in each section.

The solitary walker situated within the landscape is not a modern phenomenon, even if the term psychogeography is. The cover of Terry Eagleton’s The Ideology of the Aesthetic (1990) shows Der Wanderer über dem Nebelmeer (Wanderer Above the Sea of Fog) (1818) by Caspar David Friederich. It depicts a man in a frock coat standing on a craggy rock with his back towards us, contemplating the buffeting sea below. He carries a walking stick, telling us that he is a walker and has not just pulled up in his Landau where his coachman awaits his return. The wanderer is elevated above the sea of which he looks down and is separated from. What this image depicts is the privileged position of this figure in the landscape. Not just because of his elevated position on the rocks, but because he is male, middle-class, Western and white (his red hair is blowing in the wind, the colour punctuating the image). Our protagonist represents both the 18th century coloniser and the stereotype of a classical psychogeographer.

However, in the 21st century psychogeography takes up multiple positions. From the perspective of the background, gender and age of the individual urban walker, to their relationship with urban space itself. Today the walker feels some sort of direct connection to the space s/he explores, even if that is from a critical position. It is no longer about the tourist’s gaze, but a reflexive response where both the walker and the space s/he moves about in is momentarily changed. This section looks at the different perspectives a walking critic might take and provides three different urban spaces in order to demonstrate the variety of places available for interpretation. Taking the perspective of two walkers, and providing one analysis of the writing of a walker, these essays draw upon the place of the contemporary psychogeographer in the everyday landscape.

Chapter contributions for this section are by Roy Bayfield, Ian Marchant and Luke Bennett.

Related Links:
Walking Inside Out – book cover and abstract.
Posted by Particulations at 09:17