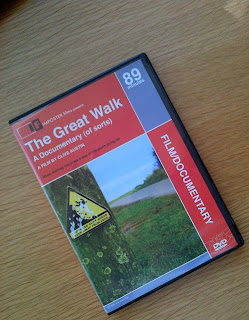 I watched this film the other day, which I would highly recommend to anyone interested in walking, psychogeography, or those who just like a good old mystery.

This is what the director, Clive Austin, says about the film:


Anton Vagus is a legend, of this we are not in doubt. A product of the sixties walking revival he has inspired a generation to take to their feet in search of the world and of themselves. This is the story of nine of them. Unconventional walkers who, through circumstance and design, became his walking companions. From their discovery of a hidden city beneath Venice to the tragic incident at Berry Head that finally tore them apart, The Great Walk treads a curious path exploring the world that they crafted out of their remarkable experiences. As the layers peel steadily away the mystery that lies at the heart of the group is bought closer into the light, until it becomes clear that, as the last person to see him alive, it is Anton Vagus to whom we must look for our answers. The only question is, how does one find one of the most elusive people on the planet?


This is not just a psychogeographical film, it’s also about group dynamics, the dangers of cliff edges, flirting on aeroplanes, and Don’t Look Now-esque appearances and disappearances. Here are some extracts from the online reviews:

“I never knew walking could be so exciting. I’m setting up a Ramblers splinter group right away!” Alfred in Affpuddle, Dorchester

“I’m sure I saw Anton Vagus in the chip shop with Elvis the other day.” Charlie from Crapstone, nr. Plymouth

“I’m joining a walking group tomorrow if it means I can get off with handsome men on planes.” Melanie in Melbury Bubb, Yeovil