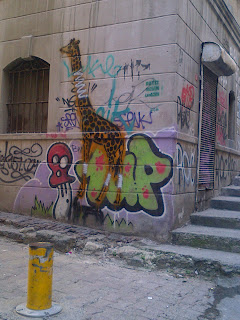 I’m just back from a long weekend in Istanbul which, even though it was a holiday, I did manage to sneak a few psychogeography-related photos in as well. We particularly liked this giraffe graffiti, without understanding the significance of it. There was actually a fair bit of graffiti in this area, between the Galata Bridge and Tower.

Below is a postmodern building that I particularly liked. I’ve been unable to find out anything about the building. When I’ve searched it on google images I get a Canadian building, 1000 de La Gauchetière, which, weirdly, isn’t totally unlike this one in the business district of Istanbul. If anyone knows what it’s called, please let me know: 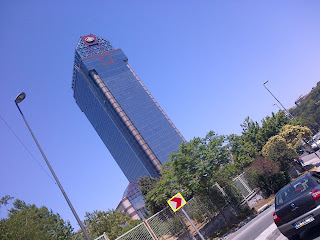 Below is a dilapidated roof which I shot from the terrace bar at our hotel. There were quite a few ruined buildings around. I don’t mean historical buildings, just old houses that had been left to fall down, sometimes in quite wealthy areas. 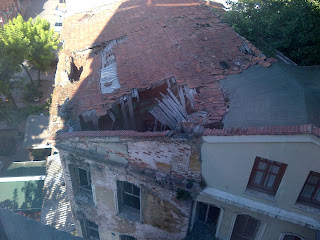 This last image was taken after just crossing the Galata Bridge on the North side. It’s a typical Istanbul urban space photo, with buildings behind a small market area.

To conclude the blog I did a search on google for ‘Istanbul psychogeography’ and interestingly, Will Self’s book Psychogeography came up, which I own, but I confess I hadn’t remembered he’d written about Turkey. The column discusses a tea pedlar. Here Self is referring to his friend, the artist of the illustrations in his book, Ralph Steadman:


Which takes us back to Turkey – Istanbul, to be precise – where Ralph was pursued by this tea pedlar with a samavor [tea urn] strapped to his back. Either that’s what it is, or it’s a prototype, steam-powered jet pack. I too have taken to going about the place with tea-making equipment to hand: a camping gas stove, a small kettle, bag, cups and milk.” (page 193)

Email ThisBlogThis!Share to TwitterShare to FacebookShare to Pinterest
Labels: Galata Bridge, Galata Tower, Istanbul, Will Self