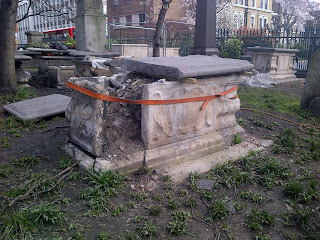 This is part 2 of my Bunhill Fields Blog. Part 1 can be found here:
GWMs, Dead Psychogeographers and Funerary Enclaves

Bunhill Fields Cemetery is under renovation at the moment, as you can see from the above image. There are neon-tabard-clad men in huts, and health and safety notices abound. The work seems to be being carried out by these people: 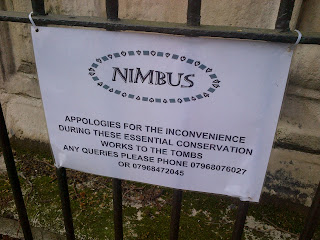 Nimbus are a conservation company from Somerset, specialising in masonry-related maintenance of the representations of GWMs, including Nelson's Monument in Great Yarmouth.

Bunhill Fields has a long history and is now a Grade I listed 'park'. This is what appeared in The Guardian at the point listed status was endowed upon it:


The cemetery, founded in the 1660s as a burial ground for nonconformists, radicals and dissenters, holds the remains of John Bunyan, author of The Pilgrim's Progress, Daniel Defoe, who wrote Robinson Crusoe, and the poet and artist William Blake, among thousands of others. In the 19th century, when it had already become a place of pilgrimage for nonconformists and radical reformers, the poet Robert Southey called it the Campo Santo (holy ground) of the dissenters. By the time it was finally declared full and closed in 1853, at least 120,000 people had been interred in the four acres. "Paradoxically, the fact that many of those buried here would cheerfully have damned one another to hell on some minute point of theological dispute has brought them all together in this peaceful place," said David Garrard, the English Heritage historian who advised the government that such a unique place deserved the highest grade listing and protection. "Many of these people suffered a lifetime's persecution for their beliefs before coming to rest here." (Maev Kennedy, 22 February 2011) 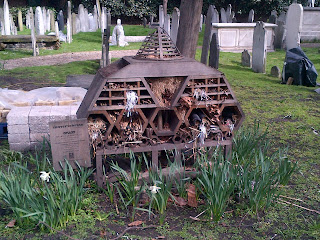 The most intriguing discovery of my exploration was this strange 'sculpture'. Apparently it is a hotel for bugs. It looks pretty luxurious. On par with a boutique hotel, I would say. I couldn't get close enough to see if any of the guests were having their continental breakfast in bed though. It was made for a competition in 2010 called Beyond the Hive. It's called InnVertebrate and is made by ORTLOS Space Engineering and Metalanguage Design. This is what the notice says: 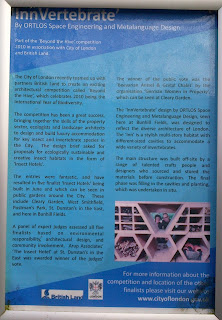 You can find out more about the wider biodiversity project here:
Big Biodiversity Trail
Posted by Particulations at 16:06