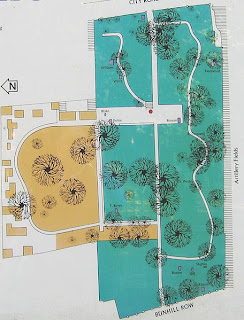 I was down in London this week doing a talk at the Cass Business School (City of London University) in EC1. This was an area I knew really well in the 1980s as it was my 'patch' because I was a sales rep. I knew every path and alley of EC1 since I walked every one of them, marking them off on my map as I traipsed. Clearly I was already a psychogeographer-in-waiting.

I do remember Bunhill Fields cemetery from that time, although I don't remember exploring it. It sits within a busy, 'businessy' part of London just North of the square mile. It is one of those surprise little 'hidden' places that seem to have somehow survived the inexorable urban encroachment taking place around it. 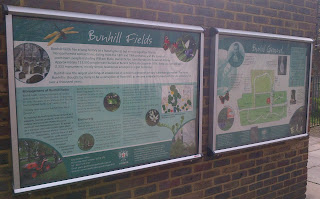 These signs (above) show you the positions of the graves of the famous people buried there. While the graveyard is full of GWMs (Great White Men) what was a pleasant surprise was the discovery of two dead 'psychogeographers' in the graveyard there: William Blake and Daniel Defoe. So here are the photos of their graves, and also an extract from Merlin Coverley's Psychogeography book which orients them in the 'tradition' retrospectively. 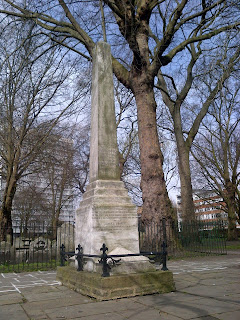 "Defoe inaugurates a tradition of London writing in which the topography of the city is refashioned through the imaginative force of the writer. [...] These 'Cockney Visionaries' are thus able to recognise sites of psychic and chronological resonance and can align these points in order to remap the city. Elsewhere this sense of an eternal landscape underpinning our own has been termed genius or loci or 'sense of place', a kind of historical consciousness that exposes the psychic connectivity of landscapes both urban and rural. In recognition of such resonance, Defoe is followed by William Blake whose poetry celebrates the spiritual city behind our own, the New Jerusalem whose coordinates he identifies within the streets of the eighteenth century city." (Coverley 2006:16) 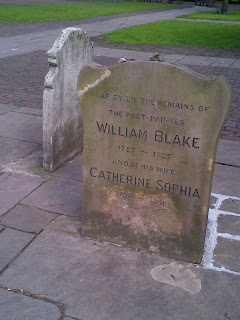 Part 2 of the blog is here: Neon Tabards, Dead Dissenters and Insect Hotels
Posted by Particulations at 14:26