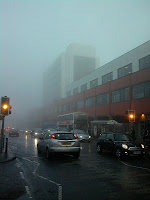 I took this image of the Arndale Centre in Headingley, Leeds on a foggy morning this November in the rush hour. The shopping centre was refurbished in 2009, when part of the frontage was painted this terracotta red colour.

Here is an old photograph of the Headingley Arndale Centre, taken circa 1967. I scanned it from the book Leeds: The Heart of Yorkshire. It doesn't say who took the photo, so I am assuming it was the author: John Waddington Feather. Apologies for the poor quality, I think it's my scanner. Note the Woolworths. What I found particularly interesting was the different shape of the office block at the far end of the centre.

According to wikipedia, the Arndale Centres were "the first American-style malls to be opened in the United Kingdom.". The first one was opened in 1961. Apparently, one of the reasons they were criticised was because many Victorian buildings were demolished in order to erect them. My own first recollection was hearing about them in Squeeze's song It's Not Cricket (an ironic title considering Headingley's connection to cricket), from their Cool for Cats album (1979). The lyrics are rather sexist, but that wasn't hugely unusual in the 1970s:

She went with all the tossers who kick about a ball
They say their club's the greatest and she has kissed them all
At the Arndale Centre, she's up against the wall

In the 1996 IRA bombing of Manchester, the Arndale Centre was damaged and later rebuilt. The links below show the bomb-damaged Arndale, and the current one:

I shall close this blog with a paragraph from an A' Level essay I wrote and just rediscovered. It's quite polemic, and also funny to read after such a long time, especially with the italicised words which I obviously must have included to add emphasis. Even though it is about the shopping mall, rather than a shopping centre, the sentiment is there. :

As a side effect of the process of consumerism a form of communion has become available. We no longer need to attend a church service on Sunday when we have available to us every day the opportunity to commune with like-minded people and purchase at the same time. And, as with a church service, there is not even a requirement for us to socially engage. We may simply attend and temporarily share in the experience of the collective consciousness.