The Parkinson Temple: How does ideology influence our aesthetic experience? (part 2) 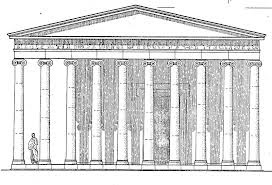 Please click here for part one of the blog

Walter Benjamin explains how: “Buildings are appropriated in a twofold manner: by use and by perception […].” (2004, p. 526). It is the perception of the temple that is the guiding force in terms of the aesthetic experience for the Greek peoples. The internal model they have of it, in regards to the concepts that define its intent, is what feeds into the feelings they have upon observing it. The same applies to those viewing the Parkinson Building. Louis Althusser explains that ideology is part of all human activity and “is identical with the ‘lived’ experience of human existence itself [...]” (1971a, p.223). Thus it is impossible to say where ideology ends and aesthetics begins: “The aesthetics of consumption and the aesthetics of creation are merely one and the same.” (Althusser 1971b, p.230). This leads us onto the self-reflexivity of this ideological aesthetic relationship.

Heidegger says: “The temple, in its standing there, first gives to things their look and to men their outlook on themselves.” (2000, p.89). He explains that “the work” sets up the world and gives meaning to this opening (2000, p.90). The temple had been created by the people for their gods, but in that very act of creation, in that singularity that not only denoted a new moment in history but also saw representation as symbolising knowledge, man had forgotten that he was the creator of the temple. In a bizarre kind of cultural amnesia the temple as representation was forgotten and instead formed the ground upon which man based his life, it became “the naming power of the word” (Heidegger 2000, p. 91). The temple became the primary position from which all other positions were related: “In the beginning there was the word. The Word was with God, and the Word was God.” (John 1: 1– 3).

In the same way that the temple represented logos for the Greeks the Parkinson Building represents a particular ideology and a specific truth. The lives of the students and staff are organised around the university. The clock tower on the Parkinson Building, a constant reminder of where you are and where you should be, reflects the period of modernity in which it was designed: a period where time became standardised and processes rationalised. The building represents order and form and the students make meaning from this in the same way that the Greeks made meaning from their lived experiences: “It clears and illuminates […] that on which and in which man bases his dwelling.” (Heidegger 2000, p.89). Althusser explains how these subtle yet complex relationships between men and their objects inform this lived experience:


The structure which controls the concrete existence of men, i.e. which informs the lived ideology of the relations between men and objects and between objects and men, this structure, as a structure, can never be depicted by its presence, in person, positively, in relief, but only by traces and effects […](1971b, p.237).


Ideological “traces and effects” are subtly sutured into our very lives and become naturalised to the extent that we may need to step out of ourselves for a moment to notice them. They permeate the world around us and exist in the very objects that feature in our daily lives. And, the reason they are unnoticeable “presupposes that ideology itself” (Althusser 1971a, p.225).

It is through this naturalising process of ideology that the Greeks collectively ‘forgot’ they were the creators of their temple and thus relocated their power there. Heidegger says that with the “temple-work” the material (matter) does not disappear but causes it to appear as if for the very first time in the opening of the world (2000, p.91). This concretisation of ideology in the temple is “produced anew each instant” (Neitzsche 1956, p.33). The temple in its “setting forth” (Heidegger 2000, p.91) out of the material of its manufacture emerges from a ground position. The Greek people, and the students of the university, simply need to glance at the symbol of their prospective temple to actualise their ideology and complete the circle of praxis. This can be compared to the Buddhist ‘wheel of life’ whereby the world evolves and involves in every moment, brought into existence in each instance because of our material attachment to it. The material world is recreated in every moment at that point of recognition (misrecognition):


Thus the world was made to appear, at every instant, as a successful solution of God’s own tensions, as an ever new vision projected by the grand sufferer for whom illusion is the only possible mode of redemption. (Neitzsche 1956, pp.9-10). However, an absolutist reading of the ideology of the object would be challenged within the poststructuralist framework. In the postmodern world where "The absence of the transcendental signified extends the domain and the play of signification infinitely." (Derrida 2004, p.34) all meaning can be considered subjective.

Heidegger explains how this emerging of the world continues providing “god has not fled from the temple” (2000, p.89). Therefore in this lack of awareness of praxis, this cultural amnesia whereby the Greek peoples forget they are the originators of the temple, the temple thus creates them. The power imbued in it makes it appear as something ‘out there’. The Greeks followed the rules and dictums of the temple and in that practice the original event was forgotten. So, in effect this aesthetic experience is narcissistic, man is taking pleasure in himself. This is what Althusser describes as “the mirror-reflection of the subjectivity of consumption” (1971b, p.231) and what Nietzsche refers to when he says that the Greeks saw themselves in the images of the gods, what he calls the “esthetic mirror” (1956, p.32). The process of the “opening of the world” (Heidegger 2000, p.91) and the “setting forth” (ibid.) of the temple-work is reciprocal. As Theodor Lipps says: “aesthetic pleasure is self-pleasure” (cited in Rieser 1957, p.243). Man marvels at the objects of his own creation and, in this self-forgetting, misinterprets the image in front of him, himself, as the face of God.