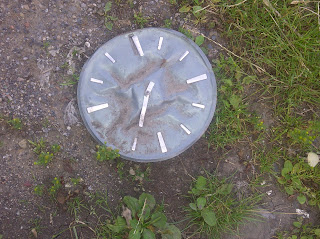 The definitions of space and place are multifarious and vary not only between fields of theory (cultural geography, urban sociology, etc) but also between individual theorists within the same field. Below I have provided the example set out by Michel De Certeau in The Practice of Everyday Life. It may seem complex upon first reading it, but when you start to think about applying examples to what De Certeau describes, it becomes easier to understand. Part 2 of this blog will provide an interesting cultural example (architectural and psychoanalytical) of how the world might be if space and place were collapsed into each other.

"A place (lieu) is the order (of whatever kind) in accord with which elements are distributed in relationships of coexistence. It thus excludes the possibility of two things being in the same location (place). The law of the 'proper' rules in the place: the elements taken into consideration are beside one another, each situated in its own 'proper' and distinct locations, a location it defines. A place is thus an instantaneous configuration of positions. It implies an indication of stability.

A space exists when one takes into consideration vectors of direction, velocities, and time variables. Thus space is composed of intersections of mobile elements. It is in a sense actuated by the ensemble of movements deployed within it. Space occurs as the effect produced by the operations that orient it, situate it, temporalize it, and make it function in a polyvalent unity of conflictual programs or contractual proximities. On this view, in relations to place, space is like the word when it is spoken, that is, when it is caught in the ambiguity of an actualization, transformed into a term dependant upon many different conventions, situated as the act of a present (or of a time), and modified by the transformations caused by successive contexts. In contradistinction to the place, it has thus none of the univocity or stability of a 'proper'.

In short, space is a practiced place. Thus the street geometrically defined by urban planning is transformed into a space by walkers. In the same way, an act of reading is the space produced by the practice of a particular place: a written text, i.e., a place constituted by a system of signs."