How to (de)Construct a Place Setting in Three Easy Steps

What is a ‘place setting’: the setting of a place, to set a place? The opposite of ‘to set’: un-set…unsettle. A place for whom/what? A set placing. A place for a subject. A setting of a scene. To set the scene for the subject of the place.

1 place /plays/ n 1a physical environment; a space 1b physical surroundings; atmosphere 2a an indefinite region or expanse; an area…4 a particular part of a surface or body; a spot…5b an important or valued position…7a a proper or designated niche…8a an available seat…8c PLACE SETTING

3 setting /’seting/ n 1 the manner, position, or direction in which something (e.g. a dial) is set 3a the background, surroundings…5 PLACE SETTING

2 - Ascertain the limits of the place setting.

“How is it possible to determine, in such a situation, what truly belongs to the inside and what does not?" (Derrida 1987: 138).
The place setting exists as a singularity in space and time: on the spatial plane it exists on a surface without clearly delineated edges, and temporally it is unclear at which point the place setting becomes itself, or when it is no longer that of which it is known in regards to assembly/disassembly.

Somebody puts together the place setting. It could be the diner, it could be the cook, it could be the silver service waitress/waiter . . . it could be you. A number of possible people construct it. The placemat, cutlery, glasses, plates are laid out by following certain cultural conventions. The dining paraphernalia is placed on a surface, a table. Some of the items may rest on the placemat, if there is one, and some will not, for instance the glasses do not, although they too can sometimes sit on their own object, a coaster.

The place setting, in terms of its existence, comes into and goes out of being surreptitiously. At some point in its manifestation it becomes what is recognised as a ‘place setting’, but its materialisation is gradual and rather furtive. It is carefully assembled piece by piece, comes to rest for a period of time, then is gradually dismantled by the diner and/or an-other: disarranging the original construction. If the place setting was only considered to be a place setting at its most complete (prior to the diner’s arrival, prior to their unpicking of it), its disassembly could be seen as a destructive act. The diner destroys the place setting, like one might destroy a work of art. This could be considered an act of violence.

If the place setting is seen as something more nebulous, uncertain in terms of when it begins and ends in time, the diner’s re-arranging of the items that form it, and the removal of those items during the dining process, could also be included in what is recognised as the place setting. But, we still have the issue of a beginning and end, though. Does the place setting begin when the placemat is laid or, maybe, when the first piece of cutlery is set down. Does it end when the final item is removed?

The place setting is a fragile thing.


3 - Ensure the place setting is ready for the diner's arrival. 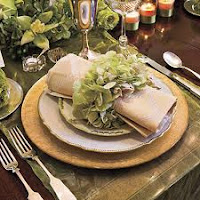 It appears that the tendrils of the place setting spread temporally in both directions. It forms a nexus which connect a past and future subject in the singularity of an event. This event, operating around the hub of the place setting, is also contingent in the changing of the subject. The subject will have been altered by the event and will not be the same subject that sat at the place setting at the beginning of dinner. Conversations might have taken place, dialogue exchanged, the subject’s psyche could be transformed, however minutely.

The place setting, as an assembly, is also part of the greater assembly which is the dining event. This could be considered to be like the Deleuzo-Guattarian “assemblage” which comes together and then disassembles. If it were considered in these terms, we could not separate the subject from the event, the subject does not attend the event they are part of the event. The place setting and the diner would be intrinsically linked, because they make up the processual dining experience.

The place setting retains the history of the event. Before the final items are removed, what remains of the place setting contains a trace of the event that has just taken place. The place setting is a recording device for the event as it is for the particular individual subject as diner. How the place setting is left at the point the diner leaves the table is an audit trail for the actions of the subject during their dinner party. If the recording could be played back the subject’s steps could be retraced. The used place setting, at the moment the diner leaves and prior to the point it is finally removed by the attending staff, alludes to an absence. The dining subject leaves their signature (their autobiography), in the rumpled silk placemat, in the not-quite-finished glass of vintage port, in the highly-polished unused silver dessert spoon. Disorder replaces order. But this disorder is telling. It speaks of a past, of an attendance.

Each individual diner will leave their history behind on the table: an archive of the event left behind in their wake. The dining subject has left their mark. Their absence leaves a sign of a past presence. ‘Elvis has left the building’ but he still exists in the discarded crumpled gig programme and trampled cigarette butts of the deserted dance hall.

The Dinner Party by Judy Chicago 1974-79, the Brooklyn Museum

References:
Derrida, Jacques. 1987. The Truth in Painting. Trans. by Geoff Bennington and Ian McLeod (Chicago and London: The University of Chicago Press).
Posted by Particulations at 08:00