Dying to find it: Where is the university cemetery?

St George's Field at the University of Leeds

At the University of Leeds there is an area located at the north edge of the campus known as St George's Field. This 'field' - referred to as a 'garden' on the signs located at its entrances - can be seen on the campus maps provided by the university under the label 'St Georges Field'. As you can see from my reappropriated map below, this space takes up a large percentage of the surface area of the campus: 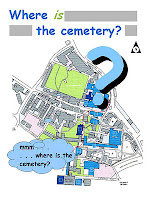 Until the 1960s St George's Field was a cemetery. Previously known as Woodhouse Cemetery and also Leeds General Cemetery, prior to it first becoming a cemetery in 1833 it was known as 'St Georges Field'. In 1969, when its function as a working cemetery was officially terminated, it reverted back to the name 'St Georges Field'. All the university maps refer to this space as St George's Field and there is very little historical information about it on the university website. If one types the word 'cemetery' into the university search engine, the first four items do include reference to the cemetery but take you to the university library archive, listing data on St George's Field. Most of the other links refer to "Cemetery Road" (the road that runs adjacent to St George's Field) and "Cemetery Lodge" (a part of the gatehouse of the original cemetery that still remains and exists as office and studio space for the School of Fine Art, History of Art and Cultural Studies). However, if one types 'St George's Field' into the university search engine a number of links appear from various departments at the university, for instance the Estates Office, and Access and Community Engagement. Also included are links that take you to information on some events that have been held there in the past few years, and to information on Pablo Fanque (the first black circus owner in Britain, who died in 1871 and is buried there along with his wife).

St George's Field is surrounded on all sides by walls and/or metal railings. At some places the wall is quite high on the outside, but because parts of the cemetery terrain are higher than the surrounding land, the walls can appear lower from the inside in some places. On the most northern side the area is bordered by the Henry Price Halls of Residence which sits, in a cantilever-effect, on the original wall of the cemetery and overlooks this field. The halls themselves are on the uppermost edge of the campus, facing Clarendon Road and, across from there, Woodhouse Moor (locally known as Hyde Park, although Hyde Park is actually the nearby neighbourhood in Leeds). The east-most side of the field is bordered primarily by engineering department buildings, but also a road, which includes a pedestrian path for only part of its length. While this is where the cemetery gatehouse is located, and there is a blue plaque outside stating that it was a cemetery, there are no signposts to the field in this area or anywhere on campus, only small signs like those located at all the entrances to the garden. The west edge of the field is bordered by a number of departments including Geography and also the School of Design. Behind these buildings can be found a small entrance into the field which is serviced by some steps. The southern edge of the cemetery is well hidden by a number of buildings including part of Chemistry. However, if one is curious enough to look, another entrance can be found to the field here via a metal staircase behind these buildings. 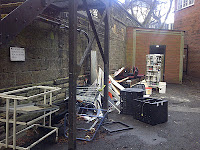 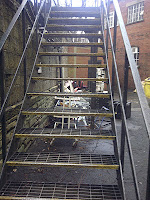 Once in St George's Field the area is presented to you as a well-kept, landscaped park-like space. In the centre is the original chapel, now, apparently, storage space for the library. A main path leads to the chapel, from the gatehouse and from the back of the School of Geography. Much of this path is made from paupers' gravestones which list a number of people located in one burial plot (these paupers' gravestones are just about viewable in the first image in the blog). The chapel is in the middle of the space. The rest of the field is mostly a grass surface, with copse-like areas of trees and shrubs which have gravestones (but not paupers gravestones) located in them. There are also a number of old, large trees which are indexed with a metal number tag. The area is not completely flat even though some photographs suggest that it is.

From an aesthetic perspective, the space is extremely pleasing to look at and quite peaceful despite not being far from the main road leading north-west out of Leeds. It looks more like a well-maintained municipal park than a cemetery. Since I already knew of the cemetery before I first saw it, I cannot say how it would feel to come across it by accident. However, I should imagine it would be a delightful surprise and maybe even produce a slightly uncanny reaction, because, in a sense, it is out of place and out of time, yet it is familiar due to its similarity to other parks one might have come across elsewhere in Britain. What is interesting, in this regard, is that despite it appearing to be temporally and spatially out of context, it was there long before the university, so one could argue that it is really the university which is 'out of place'. St George's Field could even be considered to be a little haven within the sea of learning and teaching and, in fact, on their website the Equality Service Department at the University of Leeds recommend it as a place for "quiet contemplation".

As well as the gravestones which are located in pockets, there are a few large monument-type memorials (the above image is of a memorial to Leeds firemen). Upon closer examination there are a number of small memorials dotted about the area which appear in the form of small wooden plaques close to the ground, where gravestones appear to be either absent or never existed in the first place. There is also another path which eventually joins the main path. Part of this path is slightly hidden by shrubbery, but actually leads through more gravestones. The far end of this path leads through the wall on the north edge, to another entrance/exit. There is also a large, stone, free-standing, arch located near the Henry Price building (see below) and a similar one nearby, which is situated in the original wall and has now been filled in. 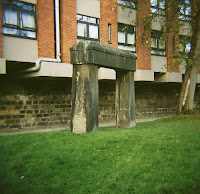 The area is open to both university staff, students and the public, nevertheless most of the time it is very much empty of people, even in good weather. However, it is a short-cut, so it is used by those who know about it to head south across campus. Also, at times you can see people walking around looking at the gravestones, and on occasions one can come across other 'events' occurring there.

So, my question is: why is the cemetery 'hidden'?

Links:
A Trip to St George's Field on a Not So Hotsy Totsy Sunny Day
An Island of Heterotopia
St Georges Field, University of Leeds
Posted by Particulations at 17:15