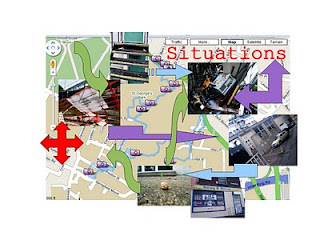 By actively engaging with urban space the Situationists International (SI) attempted to rearrange the material matter that appeared as urban décor, and even if they could not do this in concrete space, they had every intention of changing the psychic space of urbanism. These walks (dérives) became 'moments', or situations. The SI project that was directed at urbanism was about seizing a moment in time and space and attempting to change its aesthetics for a short time. This map is a modern take on the Naked City Map designed by the SI and is based on an actual dérive at the University of Leeds. The map is based on a GPS image taken during the walk and the images were taken at various stopping points which are highlighted on the map and appear as a mauve camera icon.
Posted by Particulations at 11:16