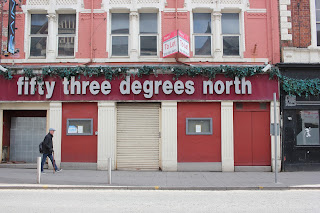 Warrington, the market town between Liverpool and Manchester, is changing fast and daily, with the past, present and future existing at the same time: mixing, weaving and colliding together as it continues the story from town to City of Culture. A soup of instant history, spin and regeneration is taking place before your eyes as you walk the streets, and at the same time in cyberspace and on social media. I pick up my camera, notebook and pen, and hit the streets for another walk and update, ready to immerse myself in the narratives.

Walking past the chemical works, over the railway bridge and into the town centre I come to the Golden Gates in front of the town hall, Warrington’s ‘Jewel in the Crown’. Such a big fuss is made of these gates, with so many photos snapped and posed that I find them boring: a tourist type area, bringing pride for those who can see no wrong in the town. Some think of it as a rugby team to get behind and support with a ‘you are either with us or against us’ mentality. I walk past shops, and bars now start to appear as I approach the centre. 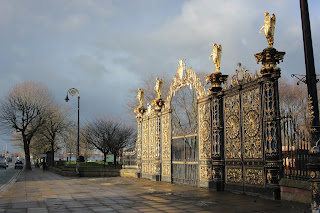 Two articles have appeared recently in the local press that indicate something is afoot and I want to find out more. The first, a letter from a reader entitled "Why I am worried about Warrington's Time Square". The second, a rant by a local journalist, which in my opinion feels patronizing, instructing us to "Give Warrington a chance" (to roll up our sleeves), and ending with a chilling Orwellian type message: "Remember negative thoughts can lead to negative outcomes". I turn left and into the Cultural Quarter.

I walk past The Lounge Bar, it still has Viola Beach written in chalk on the stonework where the shrine to the local indie band used to be. I pass Springfield Street Post Office and the ghostly figure in the upstairs window, and Palmyra Square with its interpretation boards and public spaces protection order signs. Also, the Parr Hall where the Knotty Ash big bass drum would bang every year when Ken Dodd visited: Diddy Men, jam butty mines, chuckle muscles and tickling sticks. 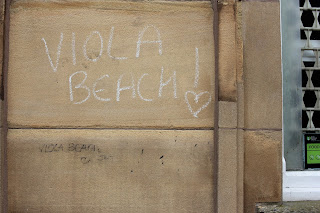 This is the upmarket area of the town. Posh restaurants and pop-up artisan food stalls, Dan Price and the embedded City of Culture bid. The local libraries saved by the public, 1848 the first town in the United Kingdom to open a rate-supported public library. I walk on towards the new multi storey car park.

The car park is a massive new structure covered in brown and gold hexagonal cladding, at present completely dwarfing the surroundings - the shock of the new and the shape of things to come. "We call it the Beehive", a man whispers in my ear as I stop to take some photos. It is up for a Peoples’ Choice Building of the Decade Award on BBC North West Tonight and has made the shortlist. One local journalist has promised to show his backside at Market Gate if it wins! It represents hyper-capitalism to me, and I wonder if it will become a design classic like Preston Bus Station or the National Theatre.

Opposite me is a large empty space surrounded by a ring of steel where the market used to be - the skeletal steel frame of the new multiplex cinema rising from the ground. The word ‘multiplex’ now feels dated, bringing to mind thoughts of action films and romcoms. What a wasted opportunity, we could have had a good arts centre instead. The whole area has been rundown, looking like 1970s ‘slum clearance’, with the buildings in Bridge Street looking so grotty that people have started photographing the top floors. Pound shops, cash converters and charity shops: there are now more coffee shops than ever, ready for the changing of the area into an entertainment zone. The only places busy in this area at the moment are McDonald's and Burger King: reassuring comfort food in the time of ‘austerity’.

But something has gone wrong, spending has plunged and growth plummeted to its weakest levels in more than five years as the ‘Beast from the East’ storm blew in battering the high street. Shop footfall nationally fell by 6%, mixed with a second wave of shop closures. I think of Fenella Brandenburg's “presupposed actualization”. And, yes, the new buildings do already exist but schizocartographic rhizomes of doubt have grown and spread, causing a presupposed actualization wobble with the illusion of the story unravelling. The city is a failure with the new buildings empty. I walk to Market Gate, seeing the dystopia that now exists. A budget of 1.8 million has been found to promote the town. 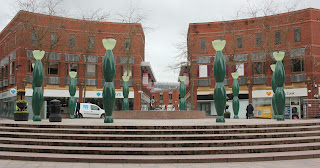 Market Gate is the centre of the town/city a crossroads with a bland circular water feature and the infamous skittles. Characterless 1980's style American Mall ornamentation, robbing the area of its roots and identity, embarrassment comes to my mind as I walk past, heading home.

Maybe it is a generational thing with the online shopping and click-and-collect revolution, but I do feel a bit nostalgic and sad as I walk past another pound shop, my memory superimposing the red Woolworths logo that used to be there. I see the newly empty Marks and Spencer store, unavailable, now, for people to pop in and buy a few groceries and comfortable underwear. The town is not fit for purpose if you can no longer buy what you want, I think to myself. I don't know whether I’m in a town or city anymore. A strange thought occurs to me that I need to regenerate myself like Dr Who!

I have always enjoyed catching the train and the excitement of visiting cities: will anyone want to come here? I walk past the remaining wall of the old Victorian Public Baths were I learnt to swim as a child, remembering happy times. Switching on the radio later, back at home, the news comes in that 450 jobs are at risk in the local Marks and Spencer Distribution Centre as it closes down and moves to another part of the country. The Trans Pennine express train will not stop here soon.The story continues... 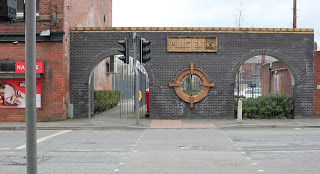