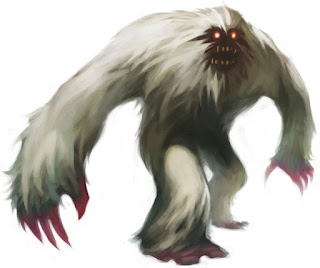 Yeti. Yet-i. Yet, in English also means still, whilst the French for yet is encore, which also means again.

Cixous addressed women writing in white ink, the yeti leaves an abominable white footprint in white snow. It is a carbon footprint of a yet to be rewritten text, but the copy is white on white.

This is apperceptively impaired downhill skiing, over glacial lakes, fleeing an avalanche of cognisance, until we take sanctuary in an igloo walled by the abominable footprint and can read again. Waiting, as for Godot, for a St. Bernard with a small barrel of comprehension round its neck.

Mortality is just immortality, without the i-m or I'm and thus holds its own cold glamour. An ice pick, as Trotsky found out to his cost, is both a means of survival on the mountain, and a lethal weapon. A lot can go wrong between the base camp and the superstructure: let us remain conscious that Althusser strangled his wife and went mad. Murder as one of the colder arts: creative writers' darlings, Marxist theorists and Communist leaders are all ripe for the cull. The Andes are a postDada variorum edition of T. H. White, the sword in the crevasse.

The defining feature of the abominable snowman is we only ever see his footprint, his trace. The footprint is like a casting from which the statue has escaped. It is a false palimpsest, not even a slow reveal, a no-reveal. Casting, of course, also means selecting a character to play a part. The author is lost, missing in action, and he has chosen us as readers or interpreters, whilst lumbering away mischievously leaving us little to go on. We have to validate this hollow frame to read it as a clue, a glossary of the unwritten.

Let us examine the semantemes in validate: inside a refrigerated vale of tears are the id and the at, the what and the where.

We now come to the difference between the abominable snowman and the cryogenic analyses. In the latter, the meaning has been frozen within the text and must be thawed to be deciphered, or at least read. In the yeti approach, the text must stay frozen to taste the meaning. It is closer to palaeontology than it is to the ready meal. We have entered the liminal hypothermic territory of post-cryogenics.

So, the yeti. We can stand in his footprint, but not walk in his footprints. Yeti. Yet-i. Yet I is already or yet there, still and again there. I is not, pace Rimbaud, an other, but many others. One man's Regan is another man's Cordelia, and this can change with the casting; our critiquing of a text is contingent upon the level of subjectivity mirrored therein. Ascent is vital: the sublime awe of the base camp hides the potential horror of the peak: one foot wrong and wonder becomes bewilderment.

The beauty of this critical approach is its simple, pious purity; the Lacanian purity of the not yet I.
Posted by Particulations at 10:16