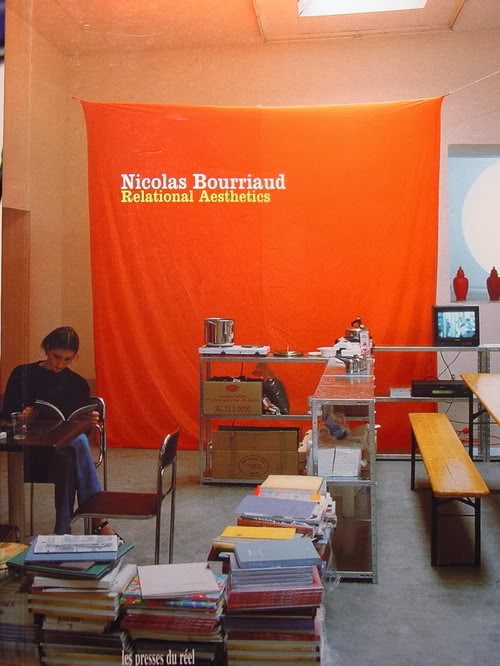 Nicolas Bourriaud's Relational Aesthetics (1998) is concerned with a particular type of art that emerged predominantly in Europe in the 1990s. Bourriaud coined the term 'Relational Aesthetics' to refer to a response to art which not only emphasised the social nature of the lived experience, but that drew the viewer into the work as participator. One of his definitions is: “art taking as its theoretical horizon the realm of human interactions and its social context, rather than the assertion of an independent and private symbolic space [..]” (Bourriaud 2002: 14). The conceptual artists of this period that interest Bourriaud, are concerned with changing the more traditional position of the gallery visitor as 'beholder' to one of an interactive process. Very often the works Bourriaud discusses do not even take place in a gallery setting but in everyday social space, for example, he mentions the artwork of Gabriel Orozco. In one work he places oranges on the stalls of a deserted market (2002: 17).

Bourriaud's intention is to examine what he sees as the misunderstandings of 1990s art (2002: 7); and he does this by discussing a number of artists in the context of a philosophical debate. He often uses theorists who do not traditionally lend themselves specifically to a critique of art but more to an examination of culture: for example, Louis Althusser, Gilles Deleuze and Félix Guattari. While Bourriaud does not see relational art as being specifically a 1990s phenomenon, what makes the art of this period different from its predecessors is its self-conscious aspect: the participator, in their own insertion of themselves into the work, becomes aware of their own social context and place in history. It is apparent that Bourriaud is interested in what relational art does, rather than in a more classical description of what the art is as an object 'out there'. He is concerned with the forming of spaces of interaction whereby an alternative discourse can come into being around the artwork; of new spatial and temporal aspects; and the production of new experiences which move away from “the ideology of mass communication” (Bourriaud 2002: 44). Relational art challenges many of the socially related binary oppositions such as private/public, inside/outside and even theory/practice. It may be this, in part, which attracts him to the non-dialectical approach of Guattari, thus dispensing with the rigidity of dyadically, and triadically, ossified conditions of existence. His concentration on Guattari's work hinges around the book Chaosmosis (1992), and a large part of the latter end of Relational Aesthetics is 'dedicated' to Guattari (while this part of the book appears in as a kind of conclusion, it would actually have been a separate essay in its original form).

What I would like to discuss is Bourriaud's particular attraction to Guattari, as opposed to Deleuze. I shall be examining what the possibilities of this privileging might be. Bourriaud rarely states explicitly why he prefers Guattari to Deleuze, but there appear to be a number of threads that could be teased out in an examination of why this might be. What makes this particularly challenging is the large amount of the theory of both Guattari and Deleuze that crosses over, not only in the work they have done together, particularly in their capitalism and schizophrenia series (Anti-Oedipus (1972) and A Thousand Plateaus (1980)), but also separately: for example, the fundamental network-like nature of what they both describe as the “assemblage”, the term they use for a collection of multiple elements that come together momentarily. An assemblage can be anything, what appears as a person, a particular situation, or a mode of thought or action. The elements that make up that 'thing' could be physical aspects of the environment, specific forces or ways of thinking. Assemblages operate on a “plane of consistency” which is not hierarchic in nature (Deleuze and Guattari 2007: 100), they dispense with the privileging which is inherent in binary oppositions. Deleuze and Guattari use the term “assemblage” when they are writing as a pair and as individuals.

It is also the case that when Deleuze and Guattari co-write they do not see the existence of a subject per se. For them the subject is not a static entity. There is not even the 'subject of enunciation' offered by theorists such as the linguist Émile Benveniste, wherein at least there is a subject in the moment of speech, however transitory that may be. For Deleuze and Guattari “each individual is an infinite multiplicity” that comes together briefly through movement and rest (2007: 280). The parts that make up the individual are not constant but continually formed, disassembled and re-formed in different combinations; these parts do not belong to the individual, they only temporarily constitute her/him and emanate from the environment of that particular situation (ibid.). At the point a person is considered to be communicating, Deleuze and Guattari describe this as an “assemblage of enunciation” (2007: 89).

Where I believe Deleuze and Guattari do diverge to an extent is in the area of the 'individual'. Deleuze clearly states throughout Difference and Repetition (1968) that he does not recognise the individual. Whereas, Guattari's model of aesthetics, in respect to the person experiencing a cultural object, even involves the use of the word 'existential': a term used in humanist-oriented philosophies where the individual's experience of reality, and expression of that, is given priority. The term 'individual' is problematic for Deleuze. For him, what appears as the ‘individual’ is created by a force he calls “individuation” which “involves fields of fluid intensive factors which no more take the form of an I than of a Self.” (2004a: 190). I believe it is likely that the work Guattari has done in Chaosmosis: an ethico-aesthetic paradigm, with its validation of subjects who have the ability to “recompos[e] their existential corporeality” (1995: 7), does lend itself to a more appropriate reading of Bourriaud's theory than does that of Deleuze's at least partial negation of the individual. However, it is important to state that Guattari's individual, or person, is still not a static entity, and he continues to use the term “assemblage of enunciation” when he writing on his own and referring to the 'speaking subject'.

It is also the case that in Chaosmosis much of Guattari's focus is on the experiential moment arising from the engagement of the individual, often with their participation in the artwork, and how this process can both affect and effect people. For Guattari, existential singularization is a process of becoming, and when sparked by “poetic existential catalysis” restores an “auto-essentialisation” in the individual (1995: 19-20). It is as if the individual re-connects with a previously alienated part of the self through a breaking down of the boundary between subject (self, ‘in here’) and object (world, ‘out there’). While this does emphasise the 'relational' aspect of relational art it also cannot necessarily be contrasted clearly to the work Deleuze has done in his discussions on cultural 'objects'. Guattari's discussion on art and artists - particularly in the final chapter of Chaosmosis 'An ecosophic object' - while lending itself to a more seamless appropriation by art theory, might be contrasted to Deleuze's concentration on the cinema, which is his preferred cultural process for analysis. However, the singular Deleuze does not totally avoid some of the terms discussed above in relation to the person (individual, subject). So the difference between Deleuze and Guattari when discussing the individual, while it is still an assemblage for both of them - in this example, something that comes together in its relation to the aesthetic - may not be such a contrast. Although it is possible Guattari has a preference for using the term 'individual' in his acknowledgement of the existential aspect of the aesthetic moment (and, perhaps, because of the humanist orientation of his psychoanalytical practice). This may also be the reason he is less constrained in using the word 'subjectivity', even if it is a fluid thing for him. In an interview with Jean-Charles Jambon and Nathalie Magnan, Guattari describes subjectivity as follows: “We do not stand before a subjectivity already given, fitted and packed; rather, we are called to produce it.” (1996b: 215).

It could also be that (although Bourriaud does not state this), Guattari's clear preference for the word 'alterity' has some particular preference for Bourriaud. Reference to 'Alterity' does not occur much in Deleuze's writing on the cinema, nor the work Deleuze and Guattari have done together (not that 'the other' is not discussed, just not through the use of this word); however, it is of importance to Guattari in Chaosmosis. This may be part of Bourriaud's attraction, because of its relation to the 'altermodern', a term Bourriaud has subsequently developed to help explain the paradigm which follows postmodernity and which is concerned with the hope that society and culture will orientate itself around multiplicity and otherness.  A video of Bourriaud describing what altermodern means is available on the Tate's website. I shall quote it in full here because I think it builds on the work in Relational Aesthetics by heralding a future that dispenses with totalising states and provides the possibility of a future which offers up a multiplicity of answers to particular issues. Here Bourriaud explains the term and makes reference to it in the context of the Tate triennial:


Altermodern is a term I invented to designate the field of what's next after postmodernism. Actually, it is more of a debate or a negation, and the exhibition is the conclusive process. Altermodern is the cultural answer to what alter-globalisation is, which is a collection, a cluster of singular and local answers to globalisation in the political field - modernity to come - which I believe is existing, is emerging. It won't be continental in the way that it totalises: more of an archipelago of different answers and artists addressing different issues. And, I believe in this form of the cluster, the constellation: points which are connected, one to another, rather than a continental or totalising form. (2009).

The term 'altermodern' does not appear in Relational Aesthetics and has been developed since writing that book, but it is likely it has emerged out of the work he did in producing the essays that make up Relational Aesthetics, and it is also possible this may be because of the influence of Guattari, which I think will become apparent as my essay evolves. While my essay will not be concentrating on the terms 'altermodern', or 'alterity', these aspects cannot be neatly separated from both Bourriaud's or Guattari's theorising because, actually, they are crucial to it.

Please click here for the next part of the blog: Part 2 and Part 3