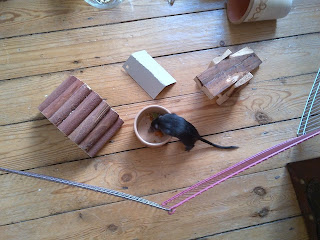 I feel there is some degree of prejudice directed at small animals (wild and domestic) as opposed to larger, more popular, 'pets' like cats and dogs. I would describe it as a hierarchical value system that involves not only size, but also such qualities as ‘cuteness’, possibly also furriness. This is apparently the reason that animal charities promote larger furry animals in order to gain donations. Despite the fact that there are many ‘less attractive’ animals in greater need than some of those that are shown in the adverts for animal charities, people just don’t donate money to animals that are considered culturally not so cute, such as reptiles. I also believe that some people could understand perfectly well why you might mourn the death of a family pet like a cat or dog, but might think there was something wrong with someone who mourned the death of their gerbil. Is it less worthy of mourning (based on it being a rodent? based on its size?)?

This blog looks at the becoming-small of the human. While not exactly the becoming-imperceptible of Deleuze and Guattari, it does have qualities in common with that. Becoming small is about changing one’s spatial perspective and accessing the space of the other such that you become inseparable from your environment and are better able to communicate (the issue of communication appears in the next blog). This is what Deleuze and Guattari say about becoming-imperceptible: “To go unnoticed is by no means easy. […] This requires much asceticism, much sobriety, much creative involution.” (2007: 308).

I am a giant next to Sister M, not that she actually sees my body as a contiguous object: she sees my head, hands/arms and legs as all separate phenomena. For instance, when I am sitting on the bed, she will run over my legs as if they are part of the bed/terrain. I have had the same experience with squirrels. While she is used to the separate parts of me, for instance, my gerbil-sized hands in her cage giving her food and my gigantic head looming over her to land a kiss on her tiny body (neither of which seem to intimidate her at all), my body moving around her space can disturb her if it is unexpected. If I suddenly appear, or if I accidentally loom up from below her cage (like prey) or if I raise my arms (like a bird), she gets scared and disappears into her burrow. So, she is used to me on one level (close up where she can smell me and check out the signs that, to her, make up my body), but not if I behave in any way like potential prey. Even though she has probably never seen any potential prey in her short life, she is hard-wired to react in this way.

While I cannot technically become smaller. I can address my behavior so as to fit into her environment in such a way where I appear less perceptible to her in any threatening way. This comes through experience from living with her, educating myself about her and altering my behaviour where necessary. Becoming-small enables me to move into her space and creates a conducive environment for her to move into mine, so that we can have a more symbiotic relationship. We both become changed – hopefully for the better of us both - through my becoming-small.

And there’s a book about deconstruction and animals that you may find interesting:
The Animal Question in Deconstruction