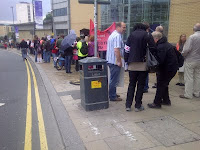 "The invocation of the idea that 'there is no alternative', and the recommendation to 'work smarter, not harder' shows how capitalist realism sets the tone for labor disputes in post-Fordism." Mark Fisher

This was the scene outside The Leeds Metropolitan University yesterday. This woman, below, representing the UCU (University and College Union), was happy for me to take a photo of her and her placard: 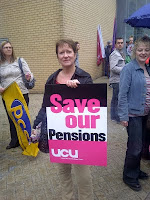 This is a paragraph from the PCS literature that was handed out:


Members of the Public and Commercial Services Union, along with our counterparts in education unions, have made the difficult decision to take industrial action as it is the only way of standing up to the government's unprecedented attacks on public sector workers.


Below is one of the leaflets I was given by protesters: 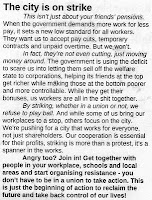 
Bibliography:
Fisher, Mark. 2009. Capitalist Realism: Is there no alternative? (Winchester: Zero Books).
Posted by Particulations at 10:41