Between the Rollerama and the Junk Yard 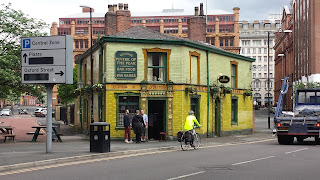 Myself and Ally Standing will have a submission at the upcoming exhibition at The People's History Museum in Manchester, Loitering With Intent. The exhibition runs from 23 July to 13 October 2016 and our contribution is a John Cooper Clarke inspired zine and artwork. Below is the abstract we entered in response to the original call for papers:


An intrinsic part of the heritage of psychogeography are the zines it has bequeathed us, such as the Situationist-inspired On the Poverty of Student Life (1966). Also, the 1990s resurgence of psychogeography is well-represented by the post-punk fanzines of Tom Vague, for example London Psychogeography: Rachman Riots and Rillington Place and the newsletters of the London Psychogeographical Association. In contemporary times this format is well-represented in Laura Oldfield Ford’s book Savage Messiah (2011).
In 2015, following the release of her edited volume Walking Inside Out: Contemporary BritishPsychogeography (2015), Tina Richardson edited and produced the zine STEPZ: A Psychogeography and Urban Aesthetics Zine in order to acknowledge the current ‘moment’ in psychogeography (what she has termed ‘The New Psychogeography’) in a traditional way – not just in a text-book, but a grassroots zine. STEPZ has proved to be popular and now appears on the syllabus of an undergraduate course at Bowling Green State University in the US, acknowledging its significance in contemporary psychogeography.
The academic and psychogeographer, Tina Richardson, and the artist and psychogeographer, Ally Standing, propose a new edition of STEPZ for the exhibition, along with supporting artwork. Inspired by the lyrics of the Mancunian punk poet, John Cooper Clarke, the zine will be Manchester and The North influenced, in particular looking at themes that are consistent across urban space in this geographic region. The zine will combine written pieces with visual elements such as photography, illustration and collage.
The artwork itself will take the form of two framed prints of pages from the zine, enlarged to poster size. The zine and accompanying posters will be printed using a Risograph machine, which is a type of stencil duplicator designed for use within a community setting. Risograph printing - often likened to other real-ink printing processes such as lithography and screen printing - produces a unique and vibrant aesthetic, which calls to mind a time before digital, making it an ideal method of printing considering the context of the zine. The Risograph machine was developed in Japan during the late 1970’s - a time which is temporally relevant, in terms of the work of John Cooper Clarke and the punk movement which partially inspires the zine. As well as being contextually and aesthetically ideal, Risograph printing is also a very environmentally-friendly method, requiring much less energy than standard photocopying, and using soy inks which are completely free from Volatile Organic Compounds (VOCs) the polluting chemicals which are used within most conventional printing.
This special exhibition edition of STEPZ will respond to a number of the themes set out in the CFP: psychogeography, Manchester and The North, the Situationist legacy and creative/DIY. We believe that this new edition of STEPZ will also help mark the exhibition itself and suture it into the history of psychogeography, as well as in Manchester’s rich zine production heritage.
You can download a free copy of the pilot edition of STEPZ here.
Posted by Particulations at 15:24