The Art of Cartocraftery or Mischevious Mappage

Cartography: "The drawing of maps or charts"
Craft: "A skillful contrivance, a device, artifice, or expedient"
-ery, suffix: "classes of goods...used in the coinage of jocular nonce-words"

Full Definition: Cartocraftery is the tongue-in-cheek re-approriation of maps for the purposes of détournement (the recuperation of past forms and ideas). Old items are 'mapped' through the process of paper lacquering, then decorated and given an amusing name based on the map used. For instance, see Least Anglia and an interview about the object on Anything LS: 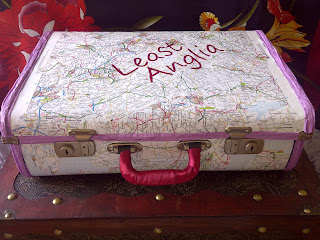 This, now, storage box is made from an old black 40-year-old suitcase, while the image, below, is an old gift box which has been mapped with Leicestershire and renamed More-or-Less-Tershire. The original box can still be seen through tiny holes which were punched in the small torn-up pieces of the county: 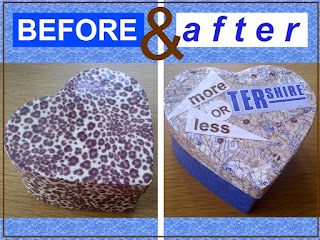 Click here to see the Easter cards which started off the whole project: Why did the psychogeographer cross the road?


Please feel free to contact me for commissions.
Posted by Particulations at 15:52 2 comments:

Here are some images I took over Leeds from the top of West Riding House last summer (2011).

There's something surreal about this car park, which looks more like a childs' toy than a real car park. 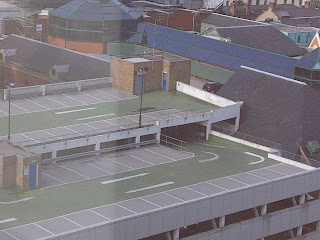 While this one of cranes is a bit disorienting, I think I was fortunate to just be in the right place to get them to appear like they are crossing over each other. 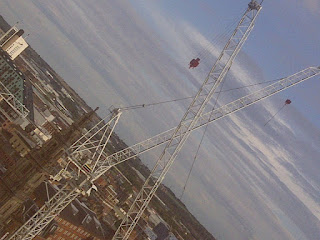 Here is the famous Leeds Dalek aka Bridgewater Place. Where I was standing I was unable to get the sloping section on the other side which gives it the Dalek-effect. However, there does seem to be a supernatural/cosmic occurrence taking place above it, which can only be some kind of cyborg attack .

Posted by Particulations at 16:22 No comments:

Why did the psychogeographer cross the road? 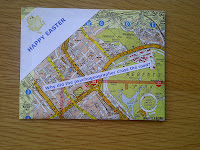 Here are my limited edition 2012 Easter Cards. A short run of 12 , hand-made, that friends were forced to volunteer to receive. Many of the map-pouches were customised for the district that the individual lived in, well those who lived in London anyway. So the front showed their road and the back was perforated over a 'sniff here' instruction of which emanated the smell of rose incense. Here are the various comments, all hugely positive, I would say ; ) 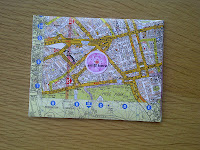 Anonymous from Hemel Hempstead council district (via text, not a psychogeographer): "Thank you for my Easter card. Not sure what to say really..."

Anonymous from Middlesex (via facebook): "Thanks for the Easter Card, Tina. I'm impressed with the way the white strip of paper inscribed 'Why did the psychogeographer cross the road?' passes right through my living room."

Anonymous from (district withheld) on expressing an interest in the Easter card: "I'd love a chunk of [somewhere in London] - I've no idea why the psychogeographer crossed the road but I bet when they got there they found Iain Sinclair had already written about it."

I bet my friends can't wait to see what Christmas brings...

This is the second part of my Freud-as-psychogeographer-blog. For the first part, please click here: Gradiva's Gait

Before I introduce Freud's urban wanderings in a "small Italian town", I would like to say a little about the complex term 'uncanny' as it appears in Freud's essay The Uncanny. Freud takes the word from the German unheimlich which means the opposite of what one might find familiar (heimlich meaning familiar - homely, but be careful here, because for Freud the two terms become conflated in what he means by 'uncanny'). So, the uncanny has the qualities of both the familiar and the unfamiliar at the same time. I would describe it as producing a strange kind of affective dissonance, which is disturbing. It throws you into this spaceless space in between the two binary oppositions (recognisable/unrecognisable, understandable/incomprehensible). Sometimes, the thing recognised is known, but is out of place and this decontextualisation can create the feeling of the uncanny.

Freud uses a super example in E.T.A Hoffman's story The Sandman to tease out what uncanny means. Although the term can appear somewhat contradictory, mysterious and hard to pin down, this is not because Freud does not do a good job in explaining it, but rather because of its unconscious origins in the person feeling this subjective reaction. Once you have started to explore the uncanny, you will understand it by comparing it to some experiences you will have likely had yourself.

Freud spends many pages analysing the term from a number of sources. Here is a definition he provides which I particularly like, and I include it here because it is a useful springboard for me to take you into Freud's walk in Italy:


"Uncanny is what one calls everything that was meant to remain secret and hidden and has come into the open."

So...Freud uses a moment when he accidentally walks into the red light district of this town in Italy, to provide his own example of the uncanny. Basically it goes thus (quotation marks are when I am using his own terms):

Freud strolls through "unfamiliar" streets in the town and stumbles upon the red light district. He quickly attempts to move out of this area and walks for a while down a few different streets. After a while he suddenly finds himself back in the same district and realises people were looking at him. He then attempts to leave again, but ends up there for the third time. At this point he gets the uncanny feeling. Freud describes this as "the unintentional return", which then enables him to talk about one of his well-known, and most fascinating theories, the "compulsion to repeat".

What I find interesting about Freud's example here is his lack of analysis (of himself) of why he might have ended up there three times. Freud would not have let his own analysand 'off the hook' if this story had been regaled to him, so I am sure he has his own theory about how his unconscious took him there three times, (well at least twice, let's say). So, in regards to the quote above: is what was meant to "remain secret and hidden" the overt buying/selling of sex by men/women on the streets of Italy, or is it some desire Freud had to witness this - what would be for him as an analyst - fascinating transaction?
Posted by Particulations at 16:09 No comments: