Announcement: 'STEPZ II: Between the Rollerama and the Junk Yard' 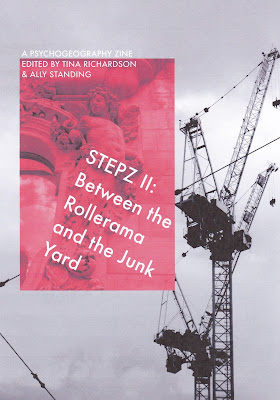 STEPZ II has gone to print and will be ready for the Loitering With Intent exhibition this summer. Here is a taster of what is to come from this second edition of STEPZ - this one focused on Northern Psychogeography, Manchester and John Cooper Clarke (please click here for the pilot edition). Above is the front cover, designed by my co-editor Ally Standing.

Below you can have a sneak preview of the editors' letter from the new edition of STEPZ!

Historically zines have formed a key part of the lineage of psychogeography and still do today. Since the time of the Situationists (1957-1972), and with the zines of the London Psychogeographical Association in the 1990s, we see these self-published fanzines taking on the culture and politics of the day. So, too, with the punk zine which was popular in the 1970s. Indeed some zine makers, such as Tom Vague, combine both punk and psychogeography.

The first edition of the East London Section of the London Psychogeographical Association Newsletter (1993) declares: “We’re Back. After thirty-five glorious years of non-existence, the London Psychogeographical Association is well and truly back”. It goes on to say: “The revival of the LPA corresponds to the increasing decay in British culture, and indeed of the British ruling elite. It has been, in fact, an historical inevitability”. Here we can see the continuation of the Situationist project of the critique of the spectacle.

STEPZ first landed in the psychogeography arena in the summer of 2015 with its inaugural edition. Having made an especially significant impact in the United States, the pilot edition is now on the syllabus of a course at Bowling Green University and in a specialist zine collection at the University of Kentucky. This upcoming special edition was created as a response to a call for submissions for the Loitering With Intent exhibition at the People’s History Museum in Manchester (summer 2016). STEPZ: Between the Rollerama and the Junk Yard appears at the intersection of psychogeography and the work of the Mancunian punk poet John Cooper Clarke. It is a response to Manchester and Northern Psychogeography.

Edited and designed by Tina Richardson (academic and psychogeographer) and Ally Standing (artist and psychogeographer) this edition includes a varied selection of writings from a diverse selection of contributors. Come with us on a trip through contemporary psychogeography! You can discover urban phenomenon such as night buses, public conveniences and abandoned playgrounds. You can amble through Salford, Driffield and Ancoats. And you can dérive with us through distant, imagined and virtual places such as Osaka, Xanadu and Google Street View!

But, let us not forget this zine is also inspired by the great punk poet John Cooper Clarke, whose lyrics geographically situate his place in Mancunian punk history. In his introduction on the inside cover of Cooper Clarke’s Disguise in Love (1978), the punk music author Alan Parker gives us an insight into someone who was known to many of us as a music legend, but really was actually a psychogeographer:

“It’s winter in 1979, the rain is falling hard onto the North of England’s already grim looking streets. Tonight…we are going to attend a gig by a man who is fast becoming a music press legend…Before the punk wars are over, John Cooper Clarke will have more than carved out his place in the story of Manchester…Legend has it he once walked the darkest of Manchester’s moors, simply to record silence!”

We hope you enjoy the zine! 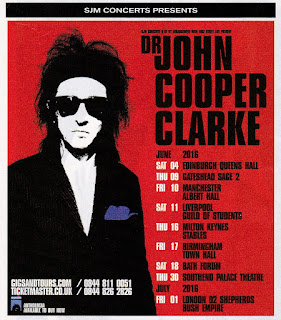