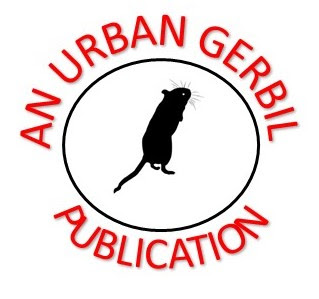 Urban Gerbil Publications is a small production, not-for-profit press that specialises in the field of urban aesthetics/semiology, psychogeography, walking practices, space and place, the city, and urban life. Formats and types of publications include: zines, artist’s books, poetry, fiction/non-fiction/creative non-fiction, grassroots academic articles, newsletters, magazines and maps. Below is a list of the current catalogue.

S T E P Z: Between the Rollerama and the Junk Yard (Summer 2016)
This is a special edition for the ‘Loitering With Intent’ exhibition at the People’s History Museum in Manchester. The psychogeography zine (see details on the first edition below) will appear alongside accompanying artwork and is inspired by the lyrics of the Mancunian punk poet John Cooper Clarke. The academic and psychogeographer, Tina Richardson, and the artist and psychogeographer, Ally Standing, have produced and edited a zine that concentrates on Manchester and Northern Psychogeography, but also represents urban walking today in its broader categorisation. The zine combines written pieces with visual elements such as photography, illustration and collage and is produced on a Risograph machine, creating a unique and vibrant aesthetic, which calls to mind a time before digital, making it an ideal method of printing for the zine.


"This artist’s book is a collaboration with my publisher, Tina Richardson. Between us we have curated this set of photographs from my own collection, mostly from my travels in the United Kingdom and United States. The photos included herein are a response to the psychogeographical phenomena known as ‘perambulatory hinges’ or, how I have termed them here, psychogeography stations."

You can read a review about it here and click here if you would like to acquire a copy.

This is the first text in the Urban Gerbil Publications catalogue. STEPZ is a zine for and by those interested in psychogeography and in critiquing, appreciating and debating urban space. It does not have the strict editorial rules applied to it that would be the case in an academic article, textbook or novel. It is, what you might call, ‘editorially restrained’ and is the brainchild of the psychogeographer Tina Richardson. This pilot edition includes contributions from both professional and creative writers. Within a few months of release the zine was on an undergraduate course reading list in the United States. Click here for further information and for how to acquire a copy.