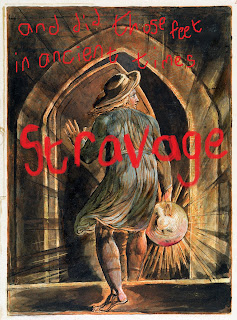 "What was the word I used this morning?"
"You used a lot of words this morning. It was like a fucking Will Self lecture."

I am new to life here in PsyGestan, the land of psychogeography. Like any immigrant to a new country one of the first things you need to do is learn the lingo. And something you notice early on is that there are a lot of words for walking. Psychogeography turns one of those awful pieces of management speak on its head and, instead of encouraging you to ’Walk the Talk’, demands that you ‘Talk the Walk’. Here in Psygestan there are as many words for walk as the Eskimo allegedly has for snow and the Manchunian actually has for rain.

But, ladies and gentleman, boys and girls, psychocartographers, mythogeographers, and schizocartographers, I want to champion an underused one: Stravage. As used by Arthur Machen back in the 1890s:


The fact was that one grey Sunday afternoon in the March of that year, I went for a long walk with a friend. I was living in Gray's Inn in those days, and we stravaged up Gray's Inn Road on one of those queer, unscientific explorations of the odd corners of London in which I have always delighted.

(A Fragment of Life, Arthur Machen)

I think that’s a great word. A cross between stroll and ravage, it contains elements of both strange and vague. They say it is probably a shortening of the word ‘extravagate’, which means stray or roam but can also mean "to go beyond proper limits".

So my definition of stravage is: To roam without limits, aimlessly.

Once I found the word in Machen I went looking for where else it was used, and found it used by T.E. Lawrence:


…if you still stravage the roads of England in a great car.

(That is exactly what you should be doing to the roads of England, isn’t it? Stravaging them in a great car.)

…and in this, from Judge Ferdinand Francis Fernandez of California:


Moreover, the statute speaks with enough clarity to permit (nay require) one to stop with its own words, rather than undertaking to stravage in a wilderness of possible legislative purposes.

…but that was pretty much it, as far as Google was concerned.

Well it’s just not good enough. Stravage is a word that demands to be used more!

Not just going forward. Oh, no. In the great tradition of psychogeography, it needs to be retrospectively inserted into appropriate works. Edward Hyde should be seen stravaging the streets of Soho at night, Quasimodo should dream of being free to stravage around Notre Dame, and John Cooper Clarke should write of a stravage down Beasley Street. A film of Travis Bickle’s stravages through New York must be made. A bi-monthly magazine called Stravage, written in French, must be unearthed from the nineteen-fifties. A Blake engraving of an angel stravaging with a lamb in Westminster should be discovered, Thomas de Quincey’s article on drug-fuelled stravages on Oxford Street has to be re-published, and Defoe’s tale of a down-and-out pickpocket stravaging the streets of a plague filled London must be re-printed. A Baudelaire poem about a Parisian prostitute he met on a drunken stravage should be rediscovered.

The word, the idea, the very theory of the Stravage must be inserted wherever possible into the past in order to ensure it has a future.

Bio: Scriberpunk is a man of mystery. What that means is he can’t be arsed writing a biography. His on-line footprint is given in this blog post.
Posted by Particulations at 15:32