Space as a Locus of Production 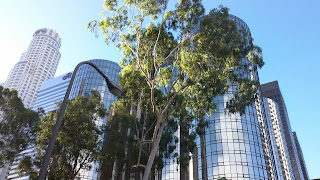 Henri Lefebvre's The Production of Space has some interesting hypothetical arguments that he presents as debates on issues arising in his text. One of my favourite ones is a conversation between a supposed interlocutor, who has taken a rather reductionist approach to Lefebvre's concept on the production of space, and a supporter of it. It's worth reading in its completeness, so I've included it all here:


'I am not convinced by your arguments. You talk of "producing space". What an absolutely unintelligible phrase! Even to speak of a concept in this connection would be to grant you far too much. No, there are only two possibilities here. Either space is part of nature or it is a concept. If it is part of nature, human - or "social" - activity marks it, invests it and modifies its geographical and ecological characteristics; the role of knowledge, on this reading, would be limited to the description of these changes. If space is a concept, it is as such already a part of knowledge and of mental activity, as in mathematics for example, and the job of scientific thought is to explore, elaborate upon and develop it. In neither case is there such a thing as the production of space.'


'Just a moment. The separations you are taking for granted between nature and knowledge and nature and culture are simply not valid. They are no more valid than the widely accepted "mind-matter" split. These distinctions are simply no improvement on their equally unacceptable opposite - namely, confusion. The fact is that technological activity and the scientific approach are not satisfied with simply modifying nature. They seek to master it, and in the process they tend to destroy it; and, before destroying it, they misinterpret it. This process began with the invention of tools.'


'So now you are going back to the Stone Age! Isn't that a little early?'


'Not at all. The beginning was the first premeditated act of murder; the first tool and the first weapon - both of which went hand in hand with the advent of language.'


'What you seem to be saying is that humankind emerges from nature. It can thus only understand nature from without - and it only gets to understand it by destroying it.'


'Well if one accepts the generalization "humankind" for the sake of the argument, then, yes, humankind is born in nature, emerges from nature and then turns against naature with the unfortunates results that we are now witnessing.'


'Would you say that this ravaging of nature is attributable to capitalism?'


'To a large degree, yes. But I would add the rider that capitalism and the bourgeoisie have a broad back. It is easy to attribute a multitude of misdeeds to then without addressing the question of how they themselves cam into being.'


'Surely the answer is to be found in mankind itself, in human nature?'


'No. In the nature of the Western man perhaps.'


'You man to say that you would blame the whole history of the West, its rationalism, its Logos, its very language?'


'It is the West that is responsible for the transgression of nature. It would certainly be interesting to know how and why this has come about, but those questions are strictly secondary. The simple fact is that the West has broken the bounds. "O felix culpa!" a theologian might say. And, indeed, the West is thus responsible for what Hegel calls the power of the negative, for violence, terror and permanent aggression directed against life. It has generalized and globalized violence - and forged the global level itself through that violence. Space as locus of production, as itself product and production, is both the weapon and the sign of this struggle. If it is to be carried through to the end - there is in any case no way of turning back - this gigantic task now calls for the immediate production or creation of something other than nature: a second, different or new nature, so to speak. This means the production of space, urban space, both as product and as work, in the sense in which art created works. If this project fails, the failure will be total, and the consequences of that are impossible to foresee.' (page 108-110)


Lefebvre, Henri. 1991. The Production of Space, trans. by Donald Nicholson-Smith (Oxford: Blackwell).
Posted by Particulations at 13:12