The Perturbed Psychogeographer: Contemplating Olympic Space, the Shard and Architectural Phalluses in General 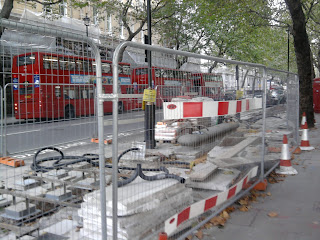 The oversubscribed Olympic space in London has got me thinking lately. In the run-up everyone who was anyone was talking about what the East End meant to them (Paloma Faith, Dizzee Rascal, et al). Then in addition all the 'psychogeographers' were also providing their responses, albeit rather less publicly or media-led. I pondered on what I would do if I was a London-based psychogeographer. Would I just refuse to talk/write/blog about it? Would I get out of London and write about somewhere else instead, by way of protest? Or, would I try to do something really unconventional? (if that is at all possible within an already unorthodox domain). 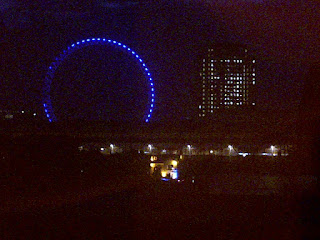 Coincidentally I came across a paragraph by Henri Lefevbre this week in The Production of Space where he mentions this oversubscribing, or over-inscribing, as he calls it. He says:

"Both natural and urban spaces are...'over-inscribed': everything therein resembles a rough draft, jumbled and self-contradictory. Rather than signs, what one encounters here are directions - multifarious and overlapping instructions. If there is indeed text, inscription or writing to be found here, it is in a context of conventions, intentions and order (in the sense of social order versus disorder). That space signifies is incontestable. But what it signifies is dos and don'ts - and this brings us back to power. (page 142)"

Needless to say, these manifestations of power are what many psychogeographers are interested in in the urban sphere, but this paragraph above also reminds us of how those who are moving in, around and out of the Olympic area (or London in general) will be responding directly to the urban décor placed there to control their behaviour. What the Situationists described as "fixed points and vortexes that strongly discourage entry into or exit from certain zones." 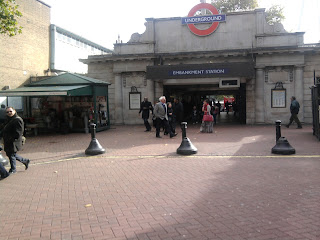 In this sense - as symbols and phenomenon of seemingly latent power - Freud may be useful for explaining how the signs in the urban environment operate on us unconsciously. His term 'overdetermination' is often used in dream analysis. It demonstrates that many different elements appearing in the manifest dream can be traced back to a smaller number of latent elements. For instance - and to be both obvious and facetious - the broken stick on the pavement, the knife in the drawer and the clipped off end of the cigar, are all manifestations of the fear of castration that might appear in this hypothetical dream.

So on that note I'll leave you with a great big phallus - London's newest, which I photographed last autumn while it was still under constructions, The Shard. It is a perfect example of the superego in operation in public space. In my slightly-more-than-amateur analysis it represents: erection (in both the architectural and male sense), power and domination over those below (see De Certeau's opening to 'Walking in the City') and 'the voice of the father' (if you don't try and seduce your mother, or kill me, you can have all this too)! 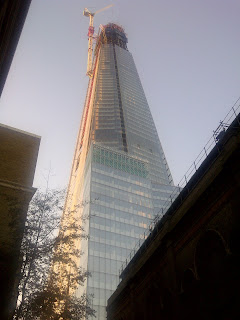 Links:
The Overdetermination of the Space of the University