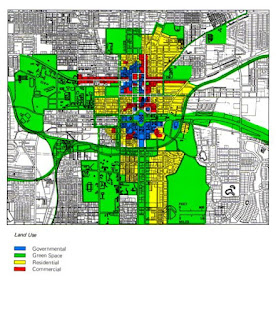 Tallahassee Land Use, USA
CC Wikimedia Commons
There's much written about the zoning used by local councils to manage and control space, which I'm not particularly going to go into here. But, being an urban aesthete I am intrigued by the control of space and the effects of that rationale on the individual. I'm also interested in how this is considered from a philosophical perspective. Here are some comments that Henri Lefebvre has made in The Production of Space on zoning. I'm going to provide a section of Lefebvre's text in full, then situate that within his discussion on "abstract space" in Part 2of this blog.


"Zoning...which is responsible - precisely - for fragmentation, break-up and separation under the umbrella of a bureaucratically decreed unity, is conflated with the rational capacity to discriminate. The assignment of functions, and the way functions are actually distributed 'on the ground', becomes indistinguishable from the kind of analytical activity that discerns differences. What is being covered up here is moral and political order: the specific power that organizes these conditions, with its specific socio-economic allegiance, seems to flow directly from the Logos - that is, from a 'consensual' embrace of the rational." (page 317)


One of the key things Lefebvre mentions here is the 'covering up' and being a psychogeographer, this is what I'm particularly interested in: what's behind the spectacle. The political decisions and administrative procedures that make space appear the way it does behind the representations, the signs, that end up manifesting themselves in space in a seemingly innocuous way, to such an extent that they appear 'natural'. Louis Althusser talks about this naturalising function in his Ideological State Apparatuses essay (which is one of my favourite texts and I'd recommend to anyone who is interested in how the individual is functionally situated as a citizen in society). Althusser explains that it is the raison d'etre of the various state apparatuses of which we partake/belong/sign-up to, that they "interpellate" us in such a way that we do not realise that we are being fixed, identified and recognised as such. But, what is crucial to Althusser, is that we don't realise this is happening to us. Althusser's clever example is of a policeman who hails someone in the street, but we turn around because we think he's hailed us (we recognise ourself in the call 'hey you there'), and in that bodily turn, and that recognition, we become interpellated by the system, by the apparatus. We take up our place as a citizen subject, this is 'natural'. In fact, and Althusser leaves this fantastic bombshell till later in the text, this happen before we are even born! (I won't explain this to you here, go read the text, it's well worth it).


Anyway, I only slightly, digress. This 'covering up' and 'naturalising' of space works in a similar way to that which I've explained by Althusser's interpellation. We situate ourselves in urban space as subjects by following its paths, accepting its rules and bylaws, and behaving like 'good' citizens. We don't question the ideological processes that take place behind it most of the time. And, even if we do on occasions complain about a 'monstrous' piece of architecture we might not like, or that new supermarket on the edge of town, on an everyday basis we are interpellated by the urban decor that controls our behaviour and that we obsequiously obey.


Moreover - and more importantly to Lefebvre here - the bureaucratic processes that hide under the veil of urban space, work in a reflexive way such that they both conceal and create the differences that are formed through the rationalising formulations actually used in, for example, zoning. We (society) creates differences, then comments on those differences like they came about all on their own. Historically they have appeared - spatially - in anything from workhouses to ghettos, with the actual forming of the differences being concealed under the 'natural order of things'.


Related posts:
Space as a Locus of Production
Louis Althusser, Ideology and the Practices of the Institution
The Power of Representation