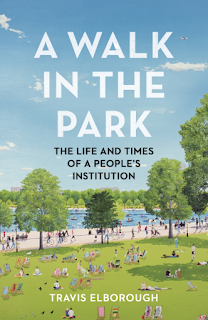 Travis Elborough’s A Walk in the Park

This is a short essay inspired by Travis Elborough’s A Walk in the Park: The Life and Times of a People’s Institution (Jonathan Cape 2016).

Travis Elborough’s new book A Walk in the Park is an informative, entertaining and elegant ambulation through the history of the public park covering a period of four millennia. While drawing on a breadth of research on the park and providing much useful information, Elborough still manages to keep the book lively and engaging when situating this phenomenon in its cultural lineage.

Rather than provide a book review (you can read some of the more ‘regular’ reviews here: one by Rachel Cooke in The Guardian and one by Daisy Dunn in The Times), I am offering a short essay. Inspired by the book my article draws on Michel Foucault’s theory of the heterotopia.

The park is an excellent example of a heterotopia as explained by Foucault in his text Of Other Spaces (1967). In his essay, which was originally a lecture, Foucault describes the difference between a utopia and a heterotopia: “Utopias are sites with no real space,” whereas heterotopias “…are real places – places that do exist and that are formed in the very founding of society – which are something like counter-sites, a kind of effectively enacted utopia in which the real sites, all the other real sites that can be found within the culture, are simultaneously represented, contested, and inverted.” (2001: 239).

In Of Other Spaces Foucault details the complex criteria required to consider a particular space to be a heterotopia, setting out his four principles. He also uses labels such as “crisis heterotopias” and “heterotopias of deviation” to apply to, for example, 19th-century boarding schools and contemporary psychiatric hospitals, respectively (2001: 240). However, I shall be choosing to look at the public park from the perspective of a heterotopia of compensation since they are designed to “create a space that is other, another real space, as perfect, as meticulous, as well arranged as ours is messy, ill constructed, and jumbled” (2001: 243).

At the beginning of his book, Elborough explains that: “many of the globe’s most famous public parks were created in part to quell political unrest and prevent revolutions” (2016: 3). They were: “widely deployed as tools to tame supposed wildness among the population, ease alienation and see off social discord” (Elborough 2016: 4). In this respect, we can see that creating a calm ordered greenspace for potentially unruly citizens to spend their social time could be advantageous for political administrations (on a local and national level). Civil unrest is not economically productive and is expensive to police and clean up. Therefore, the park has the effect of controlling the behaviour of individuals by operating on the body politic.
All space (whether urban, suburban or rural) is structured in such a way as to enforce a certain habitus (Pierre Bourdieu) on individuals. This organises their behaviour, at the same time inculturating them into a specific socio-cultural practice. The public parks encouraged certain behaviours and not others. These were (are) subtly written into the very design of the parks and more overtly into the rules attached to behaviours that were considered unacceptable in the space (some written and some not). By behaving in a different way than was deemed customary in these parks, individuals could be seen as being deviant or criminal, and Elborough’s book provides examples of this, such as fighting, homosexuality, prostitution and rape.
The ideologies and practices behind the development of urban space appear in the form of programmes which have specific material and social effects on individuals (Fischler 1995: 22). This is what Michel Foucault refers to as a regime of rationality. But this geographical and social ordering also has a function other than one of just control. Above, Foucault alludes to a dichotomy between the organised space of this type of a heterotopia – one of compensation – which opposes supposedly ‘real’ space in its disorganised form. The public park, in fact, becomes a kind of hyperreal space. If we look at Jean Baudrillard’s levels of simulation, we can classify the public park as level 2: “it masks and denatures a profound reality” (1994: 6). Thus, the park also has the effect of ‘hiding’ the needs and desires that may arise through the social reproduction inherent in everyday space: the disparity in wealth which is always geographically apparent in urban space and the differences between inherited privilege and raw poverty.
The public park was designed as a cultural space available to all citizens irrelevant of class. Quoting a British parliamentary committee, who in the early 19th century were looking at a potential public parks programme, Elborough says: “those who spent their lives ‘shut up in heated factories’…should ‘on their rest day’ be able to ‘enjoy the fresh air’” (2016: 70). Everyone then has access to the park, and this creates the illusion of social levelling. But what happens is that this type of heterotopia not only orders the space within the park. Through its compensatory function, it also organises the lived experience of individuals so as to exert power over them in the everyday.

I am sure it is no coincidence that surges in public park programmes accompany times of great socio-cultural challenges. Indeed, in Britain, there is a Parliamentary Select Committee that has just announced a public parks enquiry (this follows years of public funding cuts, meaning public parks have been under threat for a while). The Victorian period also provides a good example of a public parks programme and Elborough discusses in depth this period in Britain and the parks that were formed at this time, for example, Battersea Park in London (see above image). Opened in 1858, this part of London had previously been a wilderness where duels and riots took place, and the police feared to go (Elborough 2016: 75). To the Victorian bourgeoisie, these unruly wastelands were probably considered ‘Godless’ places.

This moment in time reflects the same philosophical epoch of Friedrich Nietzsche’s declaration “God is Dead” (The Gay Science1882). It also echoes Baudrillard’s second level of the simulacra, which I have attributed to the public park phenomenon. For Baudrillard’s second level of simulation “there is no longer a God to recognise his own, no longer a Last Judgement to separate the false from the true, the real from the artificial resurrection, as everything is already dead and resurrected in advance” (1994: 6). Thus, the formation of the Victorian park, many of which still survive today, is a stand-in for a God, who had already left the scene.
While today we are fighting to keep our public parks open, perhaps our attachment to them is as much because the real has been lost to us as it is about protecting our public spaces. “We require a visible past, a visible continuum, a visible myth of origin, which reassures us about our end” (Baudrillard 1994: 10).

Email ThisBlogThis!Share to TwitterShare to FacebookShare to Pinterest
Labels: A Walk in the Park, heterotopias, Michel Foucault, Travis Elborough