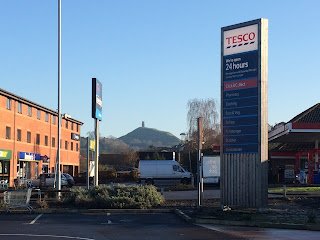 Adapted from material in Glastonbury Psychogeography.

Wearyall Hill is the location that serves as the foundation for the Glastonbury mythos. Joseph of Arimathea allegedly landed there and planted his staff in the ground, which sprouted as the Holy Thorn, whose descendent made world news when decapitated in 2010. From one end it is possible to contemplate perhaps the best panoramic view of Glastonbury, taking in the Tor, Chalice Hill, and Abbey Ruins. The opposite direction provides a radically different perspective.

The A361 runs along one side of the hill, meeting the A39 at the Wirral Park Roundabout, which sports a distinctive megalithic-style stone at its centre. Alongside the mythic hill and standing stone, the roundabout is a super-modern non-place nexus. Clustering around it are two chain hotels, Premier Inn and Travel Lodge, a supermarket, fast-food outlets, a petrol station, garden centre, and so on. There has proved to be tension in the proximity of the sacred and profane.

In May 1996 I started working for IMCO Plastics in a factory near the roundabout. I walked back and forth there every working day for nearly four years. This meant walking along one side of the foot of Wearyall Hill and passing the roundabout. I tried to pay attention to any subtle nuances that might have distinguished one day from another.

In summer 1996 McDonalds opened a branch near the garage on the roundabout. Many of my co-workers were happy about this and there was quite an exodus during lunchbreaks over the road. I was aware that the presence of the multinational giant on the threshold of Glastonbury was making a few people twitchy. How long before the centre of town was invaded by globalised franchises who were governed by money and statistics and a bigger picture in which local character and concerns were irrelevant?

A few months went by and the McDonalds lunchbreak had become normal for a number of IMCO workers. One morning a shock awaited me. As the roundabout came into sight so too did the realisation that where McDonalds had been was now a burnt out smoking shell of a building. This was an incredible thing to see. I resisted the immediate feeling that arose to whoop and holler and punch the sky. Maybe some injuries or even fatalities had ensued in the conflagration? I soon came to hear that nobody had been injured. The fire had indeed been the result of arson. Nobody was ever prosecuted for it. McDonalds have never attempted to return that close to Glastonbury.

If we take the roundabout as a Psychogeographical zone then the McDonalds arson partakes of the spirit of politics and protest of the French source material and also Iain Sinclair’s increasing despair over the globalisation and modernisation of London and what that has cost in human and cultural terms.

In 1998 a terrible tragedy occurred. There was an outbreak of Legionnaire’s Disease in the area. A dozen people went down with it. Three actually died. Only a few potential sources were identified. A water tower at IMCO was investigated and pronounced guilty. How on earth had the victims contracted it? They had all been to the outdoor section of B&Q’s garden centre, immediately adjacent to and overlooked by the tower. The store was right on the edge of the roundabout.

The McDonalds arson and the toxic tragedy were two of the most powerful events to occur in Glastonbury in that decade. They seemed to mark out the vicinity of the roundabout as damned odd and worth pondering upon.

If the nineties was the era of Ronald McSatan then the noughties saw the arrival of the state of Tescopoly. The monster supermarket carved out a huge share of the market and opened new branches everywhere with strategies that allowed it to enter into local community infrastructure whilst established businesses in the vicinity failed.

IMCO changed its name to Avalon Plastics and built new premises very near to the old. The pestilential buildings were demolished and Tesco parachuted one of their identikit stores on to the site. I found this to be entirely apt. The neon-lit sign on the roof dominates the sky at night around town. It has been joined by the illuminated visage of Colonel Sanders as Kentucky Fried Chicken succeeded where McDonalds failed and established an outlet on the roundabout. I continue to watch the area with interest.

Bio
Paul Weston is the author of Glastonbury Psychogeography, Mysterium Artorius, Aleister Crowley and the Aeon of Horus, Avalonian Aeon, and The Glastonbury Zodiac and Earth Mysteries UFOlogy. Having majored in Comparative Religion for a Combined Arts Degree (which involved a dissertation on Nazi occultism later incorporated into one of his books), he eventually became completely absorbed into the Glastonbury matrix and was fortunate to be closely involved in the Psychic Questing work of Andrew Collins. A frequent lecturer, his other main influences include Colin Wilson, Dion Fortune, Mother Meera, John Cowper Powys, Osho, Psychogeography, Gurdjieff, Anthony Robbins, and UFOlogy.
Posted by Particulations at 09:39