The road rises as you leave the billiard table-top topography of Central Manchester, east towards rising hills and the falling valleys of the Irk and Medlock. Your confinement in the tight, huddled streets and architectural canyons, opens to a distant vista of the Pennines, slowly your world seems different, wider.

Listen, the whisper of zephyr on silica, hammer on cold steel chisel, there’s music in the air! 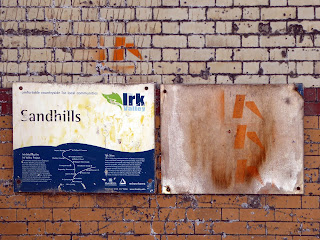 Geologists use the term Collyhurst Sandstone for the soft red sandstone, which occurs in North West England. It is a sedimentary rock, created from desert sands blown into dune formations during the Early Permian period, when the area was within the desert belts to the north of the equator.

Historically the area provided much of the stone which built Manchester. The native stone proving easy to work and transport, before the arrival of the canal and rail links that fired the industrial revolution. The rock, however, is not very resistant to erosion and disintegrates relatively quickly, much of that which was built is now well weathered or gone.

We are in a state of permanent, post-Permian impermanence.

The Collyhurst Quarry, no longer worked, was to become a pleasure gardens, the dark abyss illuminated by lantern, music, dance and the illicit romance of the night. 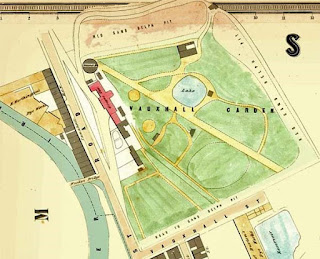 Mr Tinker named his idyll Elysian Gardens, after the place in Greek mythology where the souls of the heroic and the virtuous were laid to rest, and later Vauxhall Gardens, as in London's renowned place of recreation. His gardens were adorned by 3,000 coloured lights and those who paid 1s 6d to enter in the early 1800s were treated to a night which was at once intelligent, rural and delightful.

The band did not play on.

Now landscaped and badged as ‘Sandhills’, something of a misplaced, forlorn inner-city country park. Care worn cast metal arches proclaim the name at every entrance, announcing an event that never really seems to happen. The Lottery funded movement of earth forms gentle yet steep curves of close cut grass, crossed with paths, simply lacks focus. To walk it is to embrace the man-made void, made whole again in the near distant buildings of the city centre, to imagine the mass movement of mass, by river rafts along the Irk Valley. The artifice of the space is overwhelming and all-embracing 280 million years in the making, through geological time to today, in an instant, but where are we going?

The area is literally built on shifting sands, one can’t help but be minded of those wind-blown Permian deserts. 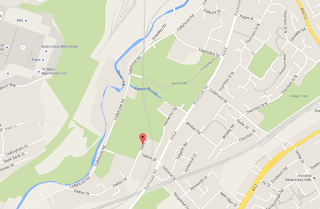 Collyhurst was once at the very centre of industrial Manchester. Large tracts of social housing were built in the area, for a settled workforce and community that fuelled and fed that City’s steady beating heart.

That industry and heart are now elsewhere, the Sixties estates and their inhabitants however, prevail – the people that prospered during the 'good times' are just about hanging on. I talked with passersby who told the familiar tale of the young leaving the area, for fresher fields.

They just don’t think this is a good area to live.