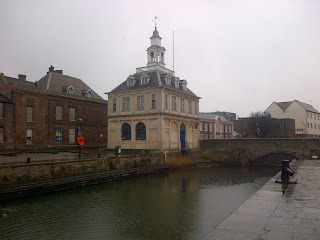 Last weekend I visited the town of my birth for a work reunion, King's Lynn. I left there in 1987 and while I have been back to the town on occasions, this was my first visit as a psychogeographer. 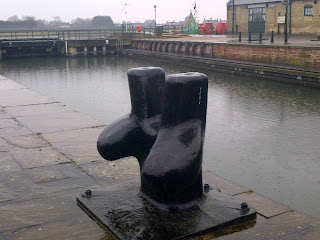 The first image is of the Custom House. We were told, as children, that it was designed by Christopher Wren. Actually it turns out the architect was Henry Bell. If you look towards the Great Ouse river from here, you will see a quayside which has been hugely developed in the time since my departure. If you cross the bridge nearby and face towards the town, you will see this seemingly insignificant area (below). However, this was used in the film Revolution (Hugh Hudson1985). A lot of this part of King's Lynn was used in the film. This photo shows the area that was turned into a brothel. Many people in the town were extras - although not necessarily all as prostitutes, may I add. 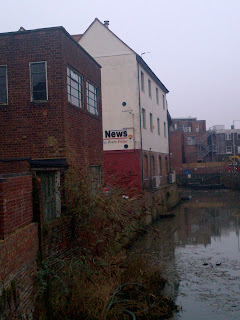 Another well-known building is the Duke's Head Hotel not far away from here, in the Tuesday Market Place. This is where I took my first job in service - well not 'in service' exactly, rather more as a hotel receptionist in 1979 - in the days when desirable work skills were still things like being able to use a switchboard (if you are younger than 40, you may need to look this up on wikipedia). You can see from the above link that it was pink at one time. It was also pink in my day. Today it is blue, as you can see below. The tiny window at the top/middle was my bedroom. In the café in the hotel they still have an old photo of the hotel, when it was a bank. 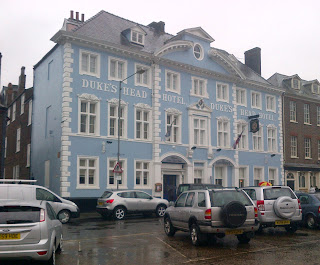 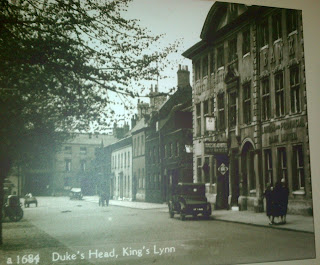 I didn't like the recently redeveloped New Conduit Street at all - it is just another homogenised consumerist manifestation. It's all been (post) 'modernised' and the pedestrianised road is now very narrow and closed-in - why have open space when you can create more places for buying? There used to be more of a piazza feel about this road, with an open area near Jarrolds the stationers.

If, as a visitor, you only saw this part of the town it would be easy to have a low opinion of the architecture. You really do need to make an effort to seek out the interesting buildings (more about this in part 2 of the blog). Also, there are quite a few closed shops. Anything from modern shops to more traditional buildings. 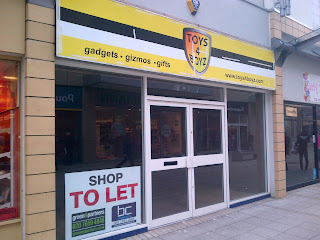 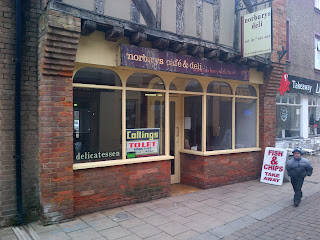 This is a new building and is the home of Costa (below). I feel there has been some attempt to take on some of the aesthetics of nearby buildings. The image below that is the Majestic Cinema which is close to Costa. See the cream paintwork and peach/red bricks in both buildings. Also, Costa does have an art deco-ey feel about it, with the horizontal lines, etc.

The Majestic is now a grade II listed building (built in 1928). We used to go to Saturday morning childrens' cinema there in the sixties. There was also another cinema called The Pilot in those days. The Majestic survived being replaced by a multiplex quite recently - hoorah!! 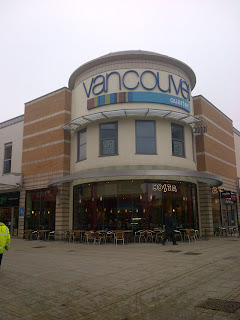 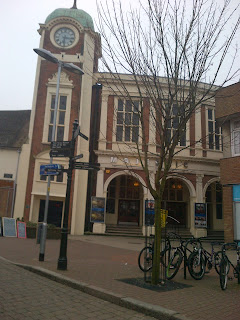 The Eastern European Supermarket in St James Street reflects the evolving culture of the town. I was trying to find some data to compare the demographics between my time and today, and stumbled upon what can only be described as a stereotypical Daily Mail response to Britain's immigration, in an article entitled Record Levels of Immigration Lead to Jam-Packed England. It was a comment posted by Very Opinionated of King's Lynn: "Romania's 2011 census 19.00 million down from 21.70 in 2002. Any co-incidence???" 38 people have rated this comment as positive, no-one rated it as negative! 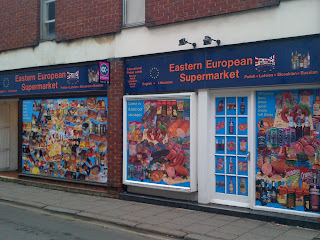 On that note...I'll leave you with a lovely (and cute) painted window of some cats which is right next to the Custom House. 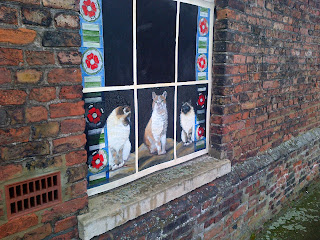 Please click here for part 2 of the blog:
Jumping Cows, Oil Cake Mills and Car Parks Without Compare
Posted by Particulations at 17:55