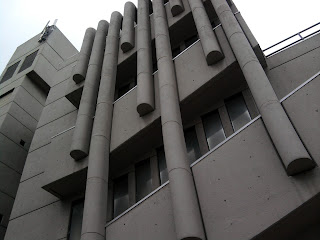 Here are Owen Hatherley's comments on the Brutalist period at the University of Leeds from A Guide to the New Ruins of Great Britain, plus some of my own commentary and images:

"Leeds University in particular can boast one of the most impressive attempts to design an inner-city campus as a total, coherent environment, albeit without the need for CCTV and gating - the complex of university buildings designed by Chamberlin, Powell and Bon between 1958 and 1968."

"Local rumour has it that this complex served as a set for the seventies science fiction series Blake's 7. This should come as no surprise. There is a divide in the perception of these buildings between the future they seem to suggest - a space-age society with egalitarian buildings make no reference to anything so prosaic as local materials, human scale or history, which some of us may find liberating, other unnerving - and the past they are most often seen to represent. That is, the other 1960s, not the now very familiar decade reminisced over by ageing soixante-huitards but the decade of a new landscape of towers and slabs, walkways and motorways, which is only very slowly starting to come back into favour after decades in which it was abhorred by many as an example of top-down quasi-totalitarianism, often better known for its transformation into film-set dystopias at the hand of Kubrick, Truffaut and Antonioni."

Chamberlin, Powell and Bon produced two bound plans for the university in the early 1960s (see above image). I don't think it would be a stretch to describe them now as objet d'art in their own right. These publications were distributed to university staff at the time. They aren't that easy to get hold of today. I have seen them for sale for as much as £100 online.

Chamberlin, Powell and Bon's vision was futuristic, as suggested by Hatherley, but it was also a contemporary response to the need for an expanded campus that could accommodate all the new postwar students. While it included the idea of students communing in Italian inspired piazzas, it also took a very rational and economic approach to the use of space. This even appeared in the form of 'joker' floors on the top of teaching buildings, which could easily be converted to teaching, administration or residential floors. Until recently some of these floors were still residential halls, as was the case in the Social Sciences building.

Whether you like, dislike or are indifferent to Brutalist architecture, much of it is now being listed, as are a number of these buildings at the University of Leeds, including the Roger Stevens Lecture Theatre shown in my first photo. So, its legacy is still really a work-in-progess. Elain Harwood, in her recent book on Chamberlin, Powell and Bon, when commenting on these university buildings says: "They have proved to be as adaptable as Chamberlin had promised, with the walls moved ad infinitum and service ducts coping with increased loadings. [...] The teaching buildings were listed in 2009, to ensure the conservation of their special qualities."

Apparently it is an urban myth that Blake's 7 was filmed there... 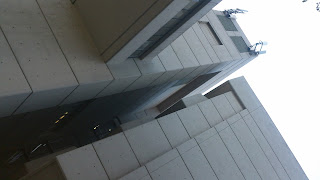