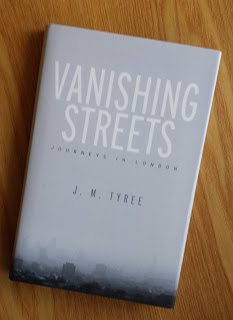 J M Tyree’s Vanishing Streets: Journeys in London (Stanford University Press 2016) is a view of London’s streets through the double lens of a film theorist and an American who first came to Britain to study at Cambridge in the 1990s. Referencing films such as Lindsay Anderson’s The White Bus (1967), Patrick Keiller’s London (1994) and Neil Jordan’s The End of the Affair (1999), the book also includes references to the work of writers that many psychogeographers are familiar with, such as Iain Sinclair’s Downriver (1991) and W G Sebald’s The Rings of Saturn (1995).

The book also includes images of the not-so-obvious that tend to interest the urban walker. So rather than the touristic images of a lovely London set out for the visitor, we have photos of retail parks and graffitied underpasses (if at any point we are in doubt that Tyree may not be ‘keeping it real’ for the reader).

Tyree takes us from Crystal Palace to Clissold Park, Wood Green to Waterloo on his explorations of London, which as well as the mode of walking, include the use of train and bus. In addition to his references to film and literature, we also get a good sense of the person behind the text through his autobiographical allusions and those that orient him culturally, such as through nods to music or football.

While Tyree does not proclaim himself to be a psychogeographer, the chapter entitled ‘Suggested Itinerary’, a letter from someone asking for advice on a visitor’s walk in London, says otherwise. It begins:

Your questions about what to see in London as a first-time American tourist are difficult for me to answer. I’m certain most visitors don’t want to browse one-pound paperbacks and odd dishware in charity shops, or walk along the industrial remnants of the docks at night leading to the Thames Flood Barrier, or visit the Victorian sewage works that saved Tottenham from cholera…