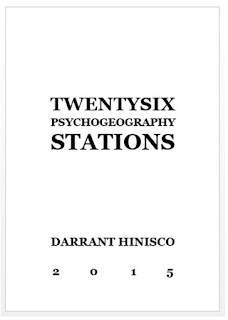 The following is an announcement from Darrant, pre-launch of his new book, which should be available from next week!

I have never called myself a psychogeographer and didn’t know much about it until recently. Although I had considered my own practice to be one that engages with urban space in a critical way, I didn’t realise that, in a very fundamental sense, this is what psychogeographers do. While I understood that walking is a key part of some artist’s practice (take for instance the Walking Artist’s Network), it wasn’t until I came across Tina’s grassroots psychogeography zine that I realised I had actually been undertaking psychogeography.

It was by chance that I found STEPZ in a second-hand bookshop. It had somehow made its way to Lisbon where I was staying, rather like a message in a bottle winding its way to me from England. I had one of those ‘ah ha’ moments when you suddenly make a discovery and in that instance the world opens up for you. So, in August I contacted Tina to ask if she would help me put my first artist’s book together and publish it with Urban Gerbil.

Tina and I selected the images together. The form of the book itself follows a very specific retro format: those of you who know about the history of the artist’s book will probably recognise it (I won’t provide the spoiler here). As for the relationship of the images with each other, and their labels, I allowed Tina to guide me on these as I wanted her influence to go beyond that of just the editor of the book (hence the philosophical and cultural references). While the book states it is by me (Tina insisted), it is really by both of us. As Deleuze and Guattari said: “The two of us wrote Anti-Oedipus together. Since each of us was several, there was already quite a crowd”...