In 1980 Deleuze and Guattari published a book called A Thousand Plateaus which included a chapter entitled ‘1730: Becoming-Intense, Becoming-Animal, Becoming-Imperceptible’.

This is a Deleuzo-Guattarian response to the experience of having a gerbil housemate! 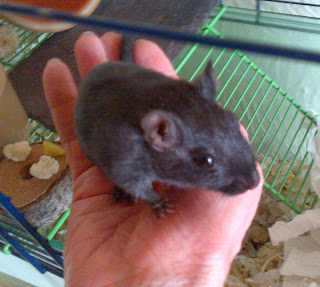 There is so much that can be said about being-a-human-caring-for-a-gerbil that comes under the umbrella of Oedipal reterritorialization as it is for Deleuze and Guattari. For instance: there are no males - gerbil or human - who live in the house with Sister Moonshine and myself. Nevertheless, while there is a traditional classical hierarchy - human over animal - that is arguably going on, I attempt as much as possible to not impose my will/rules/power over her. But this is a fine balance, since there are some things I have to do in regards to her care which she doesn’t like much, for instance cleaning her cage out. But, our house/gerbilarium is not a patriarchy. We are sisters in fur/skin together, although Sister M is totally unaware of this. We also enter each other’s spaces: I enter her cage (well my hand does) and she comes out for a run on my bed. We have, somewhat, appropriated each other’s homes/territories. 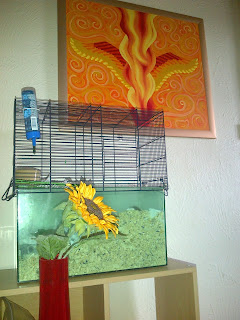 This relationship is a damage limitation exercise based on the fact that someone put Sister M in a cage and she can no longer go back to her homeland, the Mongolian desert (not that she has ever seen the desert, neither have any of her recent ancestors). Unfortunately she cannot live in my house as a free being: she could disappear into the wall cavities forever or I could get out of bed one morning and accidentally stand on her. Nor can I move into her cage with her. So, Sister Moonshine and I are separated by bars. This becoming-gerbil series of blogs is about those bars of her cage and my attempt to overcome them by adapting myself, as much as possible, to her gerbil nature. In a way the bars are like the rail tracks discussed by Jacque Lacan in Ecrits (the ones that actualise the bar in his signifying model). Sister M looks at the bars and I look at the bars, but we are looking at the bars from a totally different space. (For a Lacanian analysis which discusses this further, please click here: Once Upon a Time) The qualities of becoming-gerbil which I would like to introduce over the next few blogs are: becoming-genome, becoming-small and becoming-furry.

Sister Moonshine and myself were related about 80 million years ago. At that historically significant evolutionary point the rodent and primate lineage diverged and I took the primate path. However, this means that Sister M and I have a lot in common. Humans share a lot of DNA with rodents (hence why scientists use rodents in vivisection), even if a lot of that DNA is not ‘switched on’. What is significant about this in relation to becoming-genome is the concept of surface appearance or resemblance. For instance, at some point following this rodent/primate split, on the rodent line there followed a rat/mouse split. What becoming-gerbil is about is difference and relationships. It is about becoming as it is relates to adaptation, morphing and transforming.

When discussing becoming-animal Deleuze and Guattari state: “The becoming-animal of the human being is real, even if the animal the human becomes is not; and the becoming-other of the animal is real, even if that something other it becomes is not.” (2007: 260) They go on to say that becoming “concerns alliance” and “it is in the domain of symbioses that bring into play beings of totally different scales and kingdoms” (2007:263).

What this means for becoming-gerbil, and in particular becoming-genome, is the seeking out of a place where the gerbil can express her gerbilness as much as possible in the confines that the site and situation allow. Becoming-genome is about expressions of care. As the human care-giver of the gerbil, one places the needs of the gerbil as a high priority in order to attempt to compensate for the freedom that was taken away from her and her relatives when they were turned into pets in the 1960s (and prior to that used as laboratory animals because of their ‘placid’ nature). While it is impossible to redress the abuses inflicted upon Sister Moonshine’s ancestors, becoming-genome refers to the changes in the caregiver through nurturing her and educating the care-giver to be the best gerbil ‘parent’ possible. This involves adapting to Sister M, rather than expecting her to adapt to me, although that is no doubt occurring too.