Negotiating Brutalist Space at the University of Leeds (part 2)

Inside, Outside, Upside, Upshot 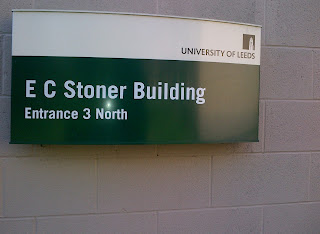 This is part 2 of a psychogeographical blog on the E C Stoner Building at the University of Leeds. For part 1, please click here: Stoner, Stoned, Stonest

The room numbering on each floor are all categorised by type (see the third image below). For example, Level 8 has “Teaching Rooms” and “Teaching Laboratories” amongst other types of rooms. Within these categories the main room use is listed, alongside the number of that room, which is the floor number followed by a full-stop, then the number of the room itself, for instance 8.51 is “Physics and Astronomy Enquiries”. Each room then has an arrow next to it pointing in the direction it is. However, one might ask why there are some rooms on Level 8 that begin with the prefix ‘9’, which denotes a Level 9 room. It then becomes apparent, that the up arrow next to these ‘9’ prefixed numbers means upstairs to the next level (I am not convinced that without knowing the logic of the prefix number, as a visitor would not, that I would understand that I need to go up a level).


If you are already familiar with the way that the different geographical land height was dealt with by the architects Chamberlin, Powell and Bon (CPB) then a lift that only goes from floors 7 to 11 might not be too much of a surprise (see the first image above). However, what does make this idea complicated is that as a user of the campus, one is never exactly sure what level one is on, because the actual ground level is different in different parts of the campus. Therefore, while the entrance level in E C Stoner is level 7, the actual ground level is level 6, because on each of the entrances to the building you take stairs up before you enter it (I took this photo at a part of the building where level 6 was not accessible by that particular lift). However, in, say, the Edward Boyle Library, ground level (and entrance level) is level 9, because it is on higher ground. While this may have seemed like a logical approach by CPB, especially because of the use of walkways linking all these spaces together and making them appear seamless, it does require an explanation from someone ‘in the know’ to actually understand the complex logic. 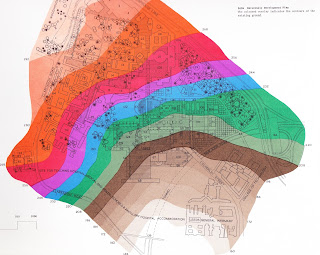 This plan shows the colours that reflect the height of the ground, the steepest moving toward the North-West edge of the campus. The colours were translated into storey levels and used to help students and staff navigate the campus. This is an image from the Development Plan by the architects.

CPB also attached colours to each level in the buildings (see above). This colour-coding system was used in the Development Plans and also extended to the signs around the campus which appeared on signposts, corridor floors and on the outside of buildings as small coloured square plaques (Occasionally these small plaques can be seen around campus today, although most of them are gone). A large section of the 1963 plan covers this use of colour-coding by level. CPB explain that there was a “difference of 216 feet in elevation between the highest level within existing buildings on Woodhouse Lane […] and the ground level near the convergence of Clarendon Road and the Ring Road” (1963) They are referring to the difference in height between the Northern and Southern borders of the university and go on to explain in details the benefit of applying colour-coding to an area with the equivalent of eighteen storeys, summarising by saying “In a nutshell, the colour identification is intended as an aid to understanding the position of places in three dimensions instead of two” (ibid.). 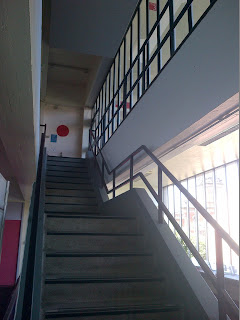 Nevertheless, I would argue that people moving about the campus generally see that space as being three-dimensional rather than two, and it is only when space is collapsed into a representation in the form of a map or plan, that two-dimension becomes the ‘normal’ view of space. While I think the motive behind the colour-coding and unintuitive level numbering was probably one of being considerate to the user of that space, I am not convinced that the complex spatial ordering of the minds of the architects translated very well into to the use of campus space for those concerned, in this regard at least.

It is at times like these that urban planners and architects could do well to employ psychogeographers!

Other University of Leeds architecture-related blogs:
The Psychogeography of Other Spaces
Emotionally Mapping the Campus
Posted by Particulations at 15:23